There’s been a noticeable rise in the term “wholesome” in the video game industry over the past few years. It’s used for games that feel like a warm hug, with soothing music, a lack of responsibility, and freedom of choice, all wrapped up in delightful colour palettes and soft, encouraging morals. With an entire industry direct-style presentation promoting these games, they’re enticing more and more people to pick up a console and play to unwind. Within this wholesome category, farming and life sims have often been my comfort food games of choice; Animal Crossing, Harvest Moon: A Wonderful Life, and Stardew Valley have all taken up hundreds of hours of my time as I attempt to grasp some kind of routine and solace in my evenings. Alchemic Cutie tries to join the ranks of these other giants, but it soon becomes a sticky exercise that is often more overwhelming than relaxing.

Visually, at least, Alchemic Cutie fits the wholesome “genre” to a tee. It oozes bright colours and adorability from almost every facet, with a rainbow of pastel and vivid shades that help to create a warm atmosphere. This gives the game a quirky yet familiar feel. Each season looks and feels different, and it’s always exciting to see just how Wimba Island changes as the calendar moves forward. Dale North’s soothing soundtrack is the perfect, gentle accompaniment to your daily life. It’s nothing you haven’t seen or heard before, but all together, it’s successful at easing you into a cosy world that is inviting on the surface.

Your adventure revolves around Yvette, a newly trained alchemist raising jellies on her family’s farm who is trying to uncover the secrets of her home, Wimba Island. She’s curious, excitable, and capricious — precisely what you’d expect of a kid who’s on her way to alchemic supremacy. I don’t play these games for their stories, but the writing and characters usually hook me, and Alchemic Cutie lacks in both areas. The writing is clearly aimed at kids, but the sometimes juvenile humour coupled with the more complex gameplay didn’t sit right with me. All of Yvette’s friends and neighbours are unmemorable, and the only way you can find out more about them is through dialogue options and not any kind of progression. 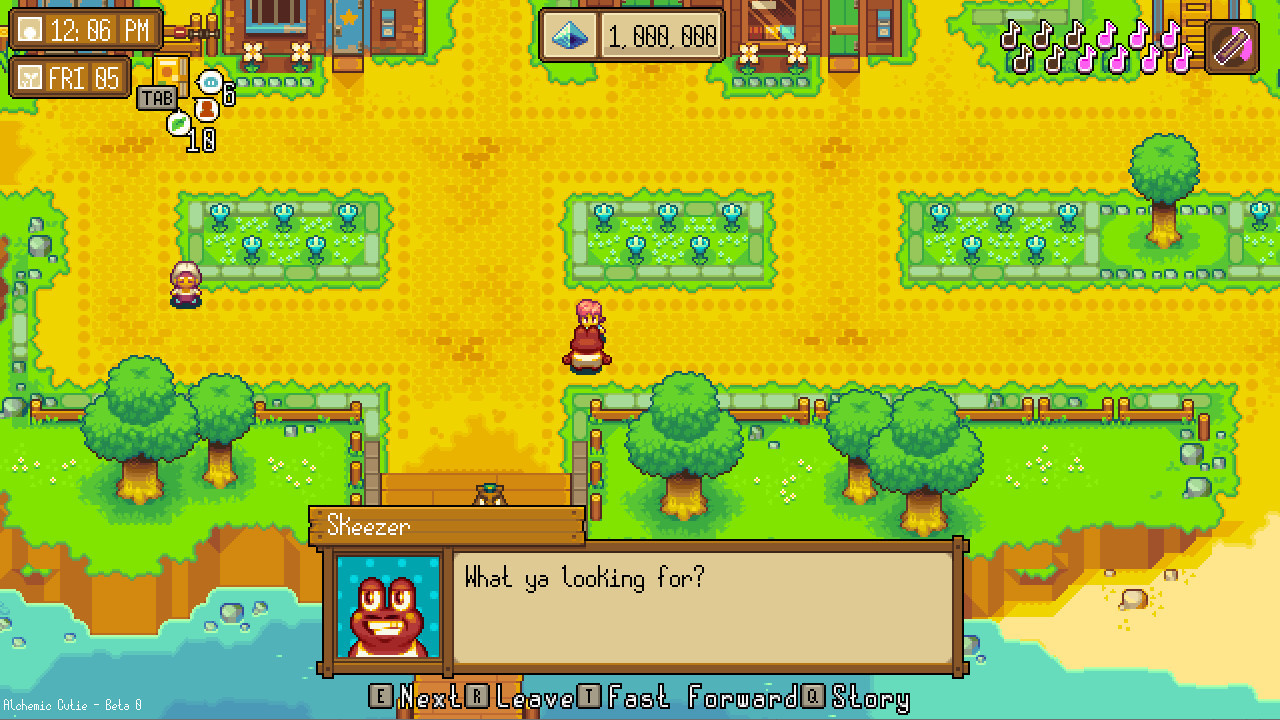 Every location is vibrant and pretty to look at.

I think this is one area where the Stardew Valley comparisons are unfair. Alchemic Cutie isn’t a farming sim in the traditional sense, nor does it allow you to forge any personal relationships. You can pick up quests from the nearby town, but I seemed to keep rotating through the same handful of errands, like parcel delivery, lost-and-found retrieval, or returning library books. The characters, simply put, aren’t engaging. They have patterns and can only offer specific services — like shops, cooking, and ticket sales — depending on the day or time, but there’s no incentive to do these quests other than a little bit of money, which I barely spent after unlocking the first new area of the island.

Here is where my biggest problem with Alchemic Cutie sneaks in: it doesn’t seem to want to explain anything to you. Early tutorials just about cover the basics, such as how to get jellies to fall in love and tell if they’re hungry or sad, but vital things like jellies’ stats, traits, and statuses, as well as the different effects of items are all left for you to discover. It’s pretty normal to fumble around for the first few in-game days in these kinds of simulator games, but I felt particularly lost and confused here. For example, I tried to feed a jelly and wondered why their hunger and mood didn’t improve, only to find out their trait means they actually need to compete over food to gain experience and happiness.

Even now, I can’t really tell you what stats and experience entirely mean for jellies and their development. The objective of the game’s story is to explore Wimba Island, and for my entire playthrough, my jellies’ stats didn’t mean anything. You can enter your jellies into competitions which can boost their stats, and some even speed up how quickly they turn into relics (items you need to unlock new areas of the island), but it’s just more busywork in a world where you’re likely already scrambling to figure out what to focus on. I only tried out one or two of these before abandoning them. 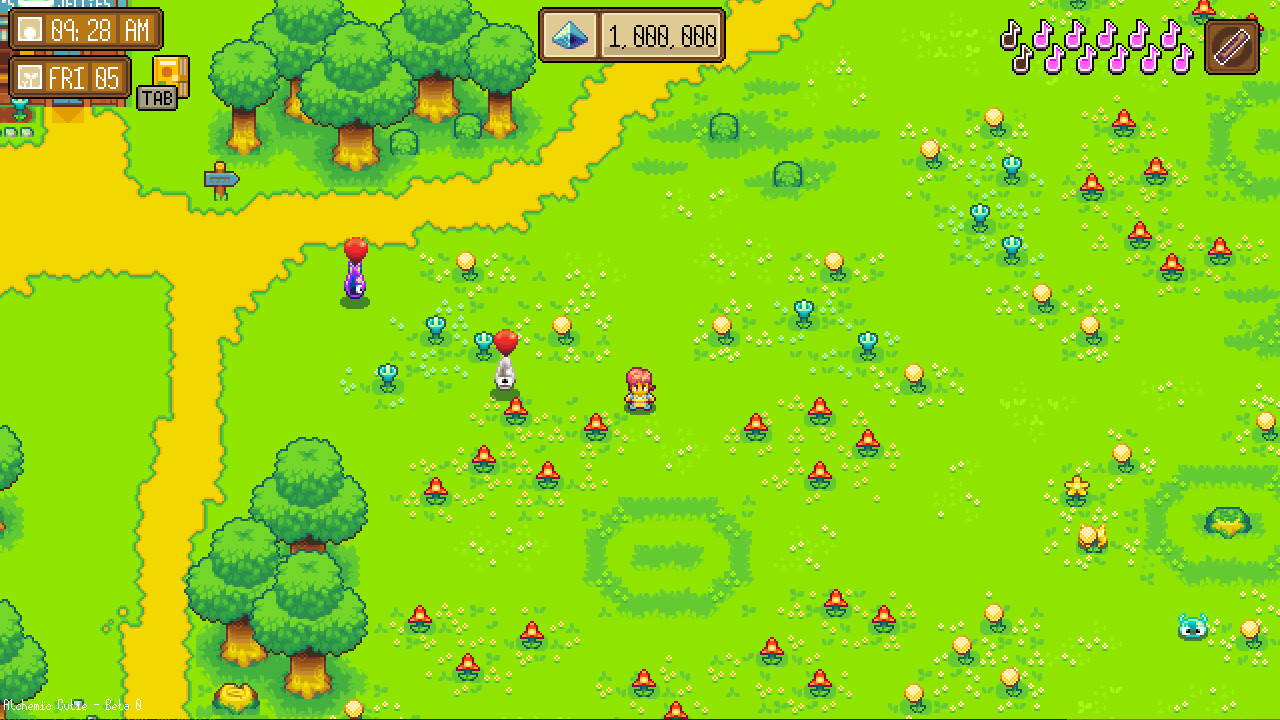 To keep your jellies happy, you need to bring them goods that you can find all across Wimba Island, and this is where the “alchemic” part of Alchemic Cutie comes into play. You can pick up various plants, shells, and other items dotted across the land. More items open up the further into the island you get. These all reappear after a few days, but by using your magic flute, you can make plants regrow instantly. Many plants look so similar until you’ve plucked them from the ground, and these plants also change between seasons. You can use alchemy to transform items into different, sometimes better, ones too.

I tried to focus on just gathering one or two types of flowers for part of a day, and this helped me slip into a bit of a rhythm and routine. Wake up, eat breakfast, feed the jellies, collect poop, collect any relics, explore the island, gather items, collect more jellies, eat lunch, repeat until dinner, bed, etc. It became relaxing, but only because I ignored basically everything else Alchemic Cutie offered. I did the bare essentials because that’s all I could cope with.

Remembering all of this, including what each item does for your jellies, is yet another thing to manage. You’re left to piece the few details you have together or trawl through the codex. And if you’ve ever played any kind of farming sim, then you know your codex is your best friend. It’s no different in Alchemic Cutie, if you know what you’re looking for. Everything you ever need is in the codex, from a map of Wimba Island to the jellies on your farm and their statuses, as well as a quest log. But navigation is nothing short of awkward. It’s cumbersome to scroll between pages or even exit out of menus altogether. Until a recent patch, you couldn’t leave most pages in the book by pressing the B button, and even now, there are still some quests and sections where it doesn’t work. 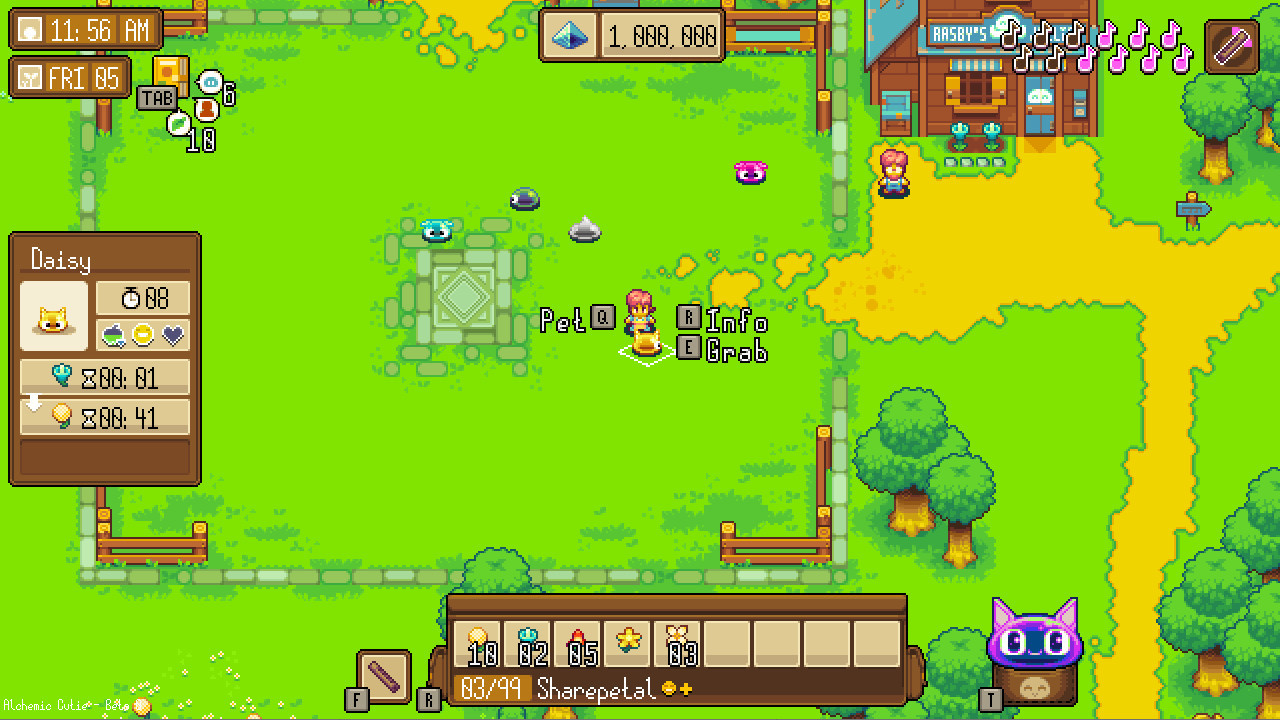 The codex is also where some of Alchemic Cutie‘s many glitches start to seep in. Viridian Software has been fantastic at updating and patching the game since its release. But these issues created a lot of frustrating moments early on as I was trying to get a handle on things, and there are still a few fairly significant outstanding bugs. For example, the game would slow down to a crawl whenever it started raining, and I could only fix it by exiting the game entirely. In the codex, jelly entries are sometimes duplicated, and you’re blocked from scrolling past them. And for a while, clicking on a hint that would help me progress the story crashed the game. These are just a snippet of the issues, but they made Alchemic Cutie unplayable at times. I even lost a day’s worth of progress a few times because the game wouldn’t reload after saving and going to bed at the end of the day.

I don’t ever want to be frustrated or overwhelmed with a game like Alchemic Cutie, and I applaud the amount of content that’s available here, but it feels like this jar is jam-packed to the point where the glass is cracking. While other contemporaries offer a variety of activities that benefit your progression, there doesn’t seem to be any reason to carry on in Alchemic Cutie once you’ve beaten the story. Unless you really like that pink-coloured jelly with the bear ears and you want to keep them forever.

What do you think about the Battlefield 2042 open beta