Lynette Mirror is the top bridal advisor for Cupid Corporation, the premier matchmaking business in the city of Los York, when she’s handed her biggest challenge yet: getting five clients who are so notoriously difficult they’re known as the Parasite 5 ready for marriage. With a potential promotion on the line, she’s prepared to give it her all, though she certainly isn’t expecting some of the twists and turns her mission will take. Reality TV shows, sudden stripteases, and even nefarious rival matchmaking companies all come into play. Not to mention that the world of myth might experience a resurgence, especially since Lynette is actually Cupid herself on a mission to prove to her overbearing and haughty father Mars that human matchmaking is more powerful than the gods imagine. Will Lynette succeed in her goal, earn that promotion, and maybe even find love for the first time in her life? That is entirely up to the player’s decisions in Cupid Parasite, a zany romantic comedy otome VN.

Cupid Parasite is an entertaining title that never takes itself super seriously, leaning more toward the light side. From the bright and vivacious visuals to the bouncing and vocally-heavy music, everything about it is wonderfully over-the-top and very much in your face from the onset. I could see those stylistic choices not pleasing everyone, but I personally loved the colorful tone and energy that permeates the game from beginning to end.

At its core, this title is a visual novel. Character portraits appear on-screen alongside blocks of text as the story advances, with the occasional still CG art scene when something especially crucial happens. At times, the flow of text is broken up by a decision point determining the direction the plot takes or further endearing Lynette to one of her potential suitors. If you’ve played a similar VN before, it is easy to figure out the gameplay pattern. The one exception to this happens in the middle of the game’s common route when the-player-as-Lynette must take a personality test to determine their romance type. A series of questions follows, and a type associated with one of the bachelors is chosen based on the results.

Your type might have you leaning towards a certain character’s route, though ultimately the decisions made throughout Cupid Parasite still have an impact on exactly how things play out. For instance, a person who gets the Pragma type associated with Shelby then chooses all of the “correct” responses for Shelby’s route will be rewarded following a final love/compatibility check. It’s an interesting concept to utilize in this type of game, and it is integrated into the story rather smoothly. My one complaint with the personality test is that the controls and UI for the romance type test portion aren’t the most seamless and require some trial and error to figure out. 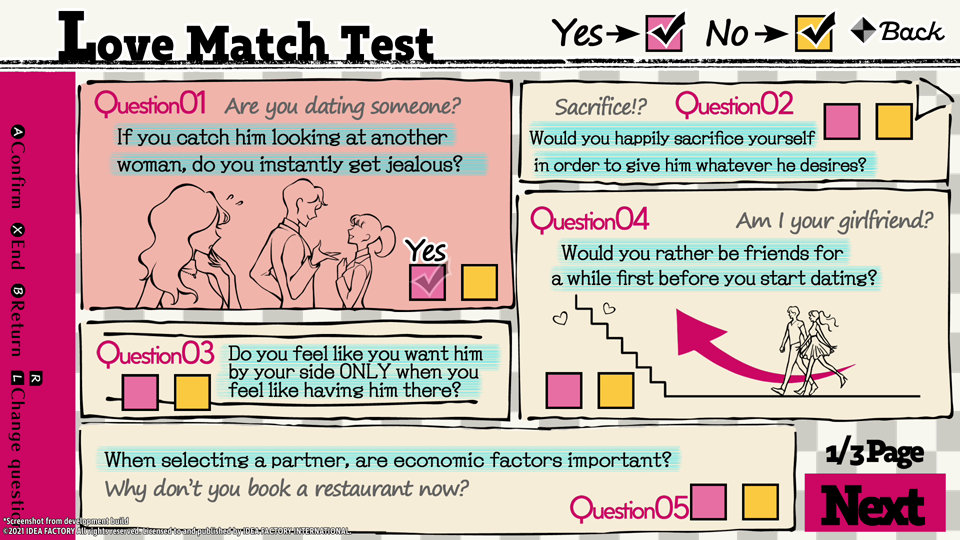 The Love Match Test plays a unique role in the game.

That being said, Cupid Parasite is pretty straightforward in its gameplay approach, save for the test portion. You advance through the story and can check your progress using a handy flowchart that helps you figure out where you are in the plot. From there, you can see where branching points and alternate endings for specific routes might be. Players can also view the amount of rapport Lynette has developed with all of the suitors and can save or load a game file whenever they wish. Given the sheer amount of endings and routes available, the flowchart in particular is quite a helpful feature. If you’re looking for an extra challenge, there’s an option to turn off the love indicator, so you’ll be unaware visually if you made a correct decision. Unlocked extras include a CG gallery, a BGM collection, and access to the VN’s movies.

Cupid Parasite is a romantic comedy at heart and comes with all of the tropes and trappings associated with that particular genre. The Parasite 5 all represent extreme personality traits that prevent them from being good marriage candidates: Gill is the Lovelorn Parasite pining after someone from his past; Shelby is the Prestige Parasite focused on maintaining his high status above all else; Raul is the Obsessed Parasite extremely taken by anything mythological in nature; Ryuki is the Glamor Parasite hyper-fixated on outward appearances and fashions; Allan is the Thieving Parasite only interested in women who are already in committed relationships. Later on in the game, Lynette herself is even referred to as the “Cupid Parasite” because of her keen ability to bring people together despite an inability to detect love for herself.

Throw into the narrative mix insanely random fanservice moments, the divine being subplot, and a rival matchmaking company that is being overrun by an all-too-familiar shadowy figure, and you’ve got yourself an entertaining rom-com in no time flat! Things that are very obvious to the player, like when Lynette and a given suitor have fallen for each other but haven’t revealed so yet, run rampant through the story as well and further lend a sense of humorous romance and lightheartedness. Even the alternative “bad endings” to routes have a more positive feel to them than most other otome titles. The cast is full of incredibly endearing characters with surprising depth despite their eccentricities and extremeness, and Lynette is a lively heroine you can’t help but root for. Cupid Parasite wears its inspirations on its sleeve, and I found it rather refreshing to play a generally lighter otome. 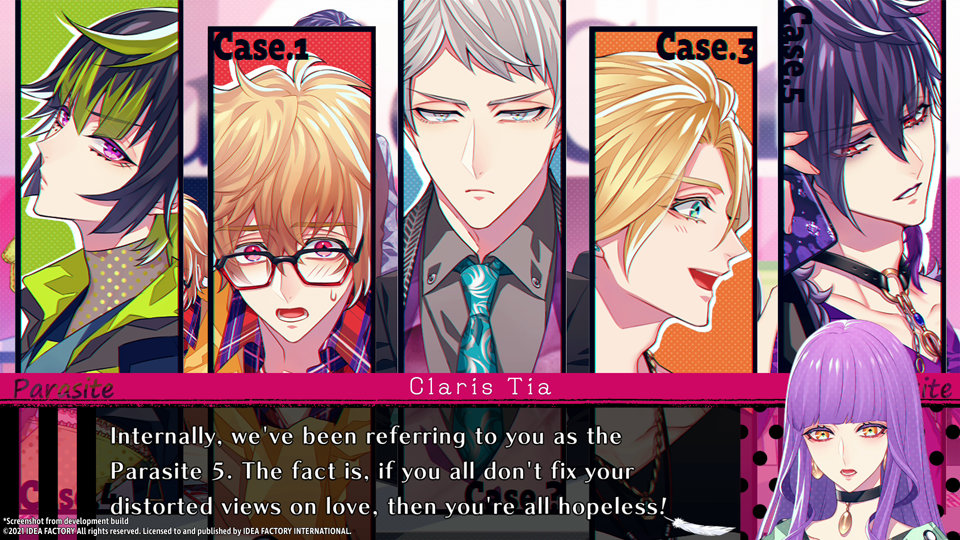 The Parasite 5 need your help as a bridal advisor and Cupid!

Unfortunately, the sense of light and brightness that permeates every aspect of Cupid Parasite might just be its biggest weakness, as I imagine a romantic comedy-type story won’t appeal to everyone. Furthermore, the loud visual presentation could be too much for some players, and some might even find the backdrops too busy or cartoonish. I feel it helps Cupid Parasite stand out from the crowd, but by doing so, it might narrow the number of people who will enjoy the title overall.

As far as the script itself goes, the localization has a lot of heart and energy that matches the game nicely. I did think more could be done for the text blocks to differentiate when someone was speaking out loud versus a descriptive line or thought, but that is relatively minor in the grand scheme of things. Occasional grammar issues or typos would crop up as I played, but they were easy enough to correct in my head and weren’t insanely detrimental to the overall experience. It’s noteworthy that Idea Factory International is aware of these issues and will be installing a patch later to correct many of them, along with some missing text in Ryuki and Raul’s routes. So hopefully this will be a moot point in the future entirely, though as I said, I don’t find it incredibly hard to overlook currently. 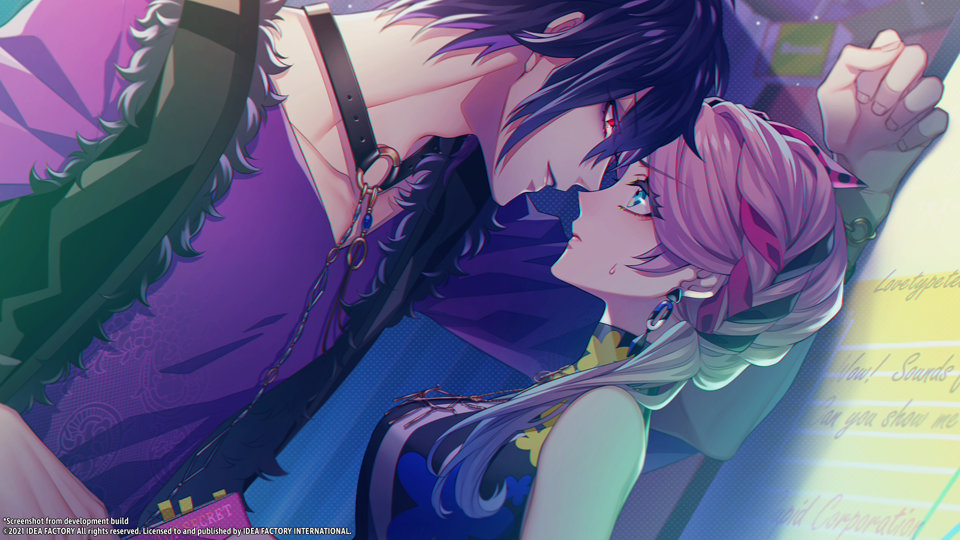 The artwork for the game is gorgeous and some scenes can get steamy.

The character art and event CGs used for Cupid Parasite are colorful and immediately eye-catching, with several lovely moments and even some spicier ones thrown in for good measure. I was always impressed with how gorgeous and vivid the visuals were, and I found that the graphic presentation captured the feel and atmosphere the game was going for wonderfully. The voice acting is top-notch throughout, with all of the actors bringing their characters and their various quirks to life.

I’d also like to take special note of the music, which sucked me in as soon as I saw the catchy opening cinema. The BGMs are equally as vibrant and catchy as the rest of Cupid Parasite and even feature quite a few vocal pieces. Many of the tracks would get stuck in my head for days after hearing them, and it is easily one of my favorite OSTs of the year. If I have one issue with the BGMs, it would be that I simply wish there were more of them because variations of the same songs would often repeat throughout a playthrough.

Cupid Parasite is a lengthy game with a decent-sized common route and suitor-specific routes that tend to be just as long. Given that there are five suitors initially and a secret character route once you’ve completed the others, along with the various alternate outcomes you can uncover, there is quite a lot of replayabilty to be had here! The sheer amount of energy in the story, combined with a likable cast of characters and well-written developing romances, makes this a rom-com worth perusing if that happens to be your thing. If nothing else, Cupid Parasite certainly knows how to entertain its target audience!