As a huge fan of Square Enix and a newer fan of PlatinumGames, I was elated to have the opportunity to get some hands-on time with Bablyon’s Fall, the upcoming action game collaboration between the two companies. Unlike many PlatinumGames projects, Babylon’s Fall focuses on four-player co-op. You play as a sentinel, a person granted special powers after being forcibly implanted with a powerful relic called the Gideon Coffin. It’s your mission to join up with other sentinels to pillage the unexplored ruins of a massive tower built by long-dead Babylonians.

The beta included a few dungeons to explore, but it kicked off with character creation. As of now, the character creator is very limited and has a few UI issues to work out, such as character option menus obscuring the character preview or the inability to zoom and rotate the preview when selecting certain options. Character creation also includes three different race options, which determine your starting weapon. I went with the Agavian, a race gifted with natural strength that starts the game with a colossal hammer.

After character creation, I finally had an opportunity to get into a dungeon. While the game is designed for four-player co-op, playing with fewer players is an option. I played solo for my first dungeon to get a handle on the controls before jumping into multiplayer. Unfortunately, My initial impression from this dungeon was a little rough.

The difficulty scales depending on the number of players present, but the solo experience is still a little dull. Enemies deal enough damage to challenge solo players without overwhelming them, but even the weakest enemies have enough health to survive a ton of attacks. To make matters worse, the combat is at its least interesting in the first dungeon, as your attack options are limited by access to a single weapon type.

My hype for Babylon’s Fall drastically increased as soon as I jumped into a dungeon with a complete party and access to multiple weapon types. Playing with a full party enables you to combo your attacks with other players, which ups the pace of the combat far beyond the solo experience. Furthermore, since your character’s playstyle is based entirely on your equipment, each party will play a little differently. This variety adds an element of replayability to each of the game’s dungeons. All this to say that multiplayer is the way to play Babylon’s Fall, but the key factor influencing whether this game stands the test of time is its combat system. 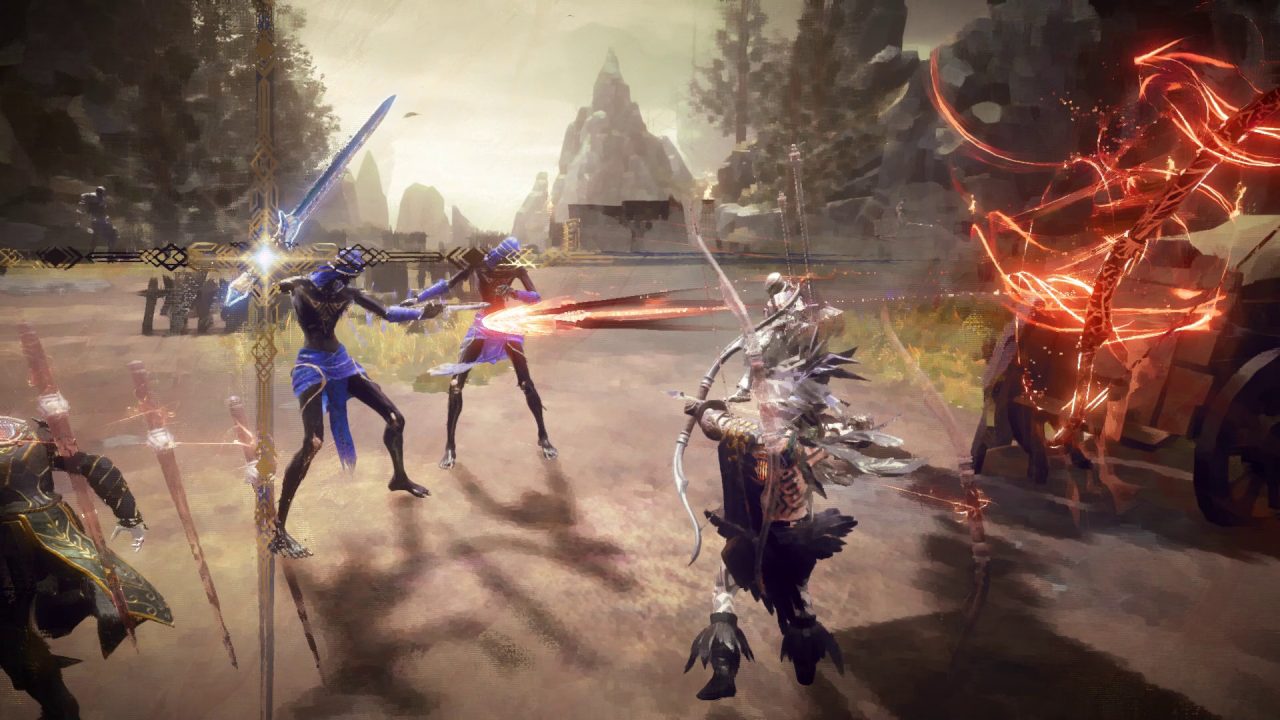 The bow was my favorite weapon.

Babylon’s Fall’s combat system consists of four attack buttons and a dodge roll. Each attack button is associated with one of your four equipped weapons. In the first dungeon, this meant all four of my attacks were with a hammer, since that’s the only weapon I started with. After the first dungeon, however, the combat system opens up, as you have access to all four of the weapons: bows, swords, hammers, and wands.

You equip a weapon to each of your attack buttons, which include a light attack, heavy attack, and two special attacks that use a mana-like resource. This allows you to mix and match weapons depending on which attacks you like best. My favorite build was bow for my light attack, hammer for my heavy attack, and wand and sword for my special attacks. You don’t have to use one of each weapon, so there’s tons of room for experimentation between the four weapon types. Weapons can also have different stats and passive effects that make them better in specific slots.

The dodge function in Babylon’s Fall is similar to other major action titles. It is a simple roll, and if you time your dodge just after an enemy attack, you get a chance to counterattack. This rewards good play and also creates a nice risk/reward that encourages players to learn the enemy attack patterns and play a little more dangerously. Babylon’s Fall is slower-paced than other PlatinumGames projects and lacks the stylish flair the developer has become known for. Instead, the game embraces a grittier combat system with a darker, more grounded tone to match. 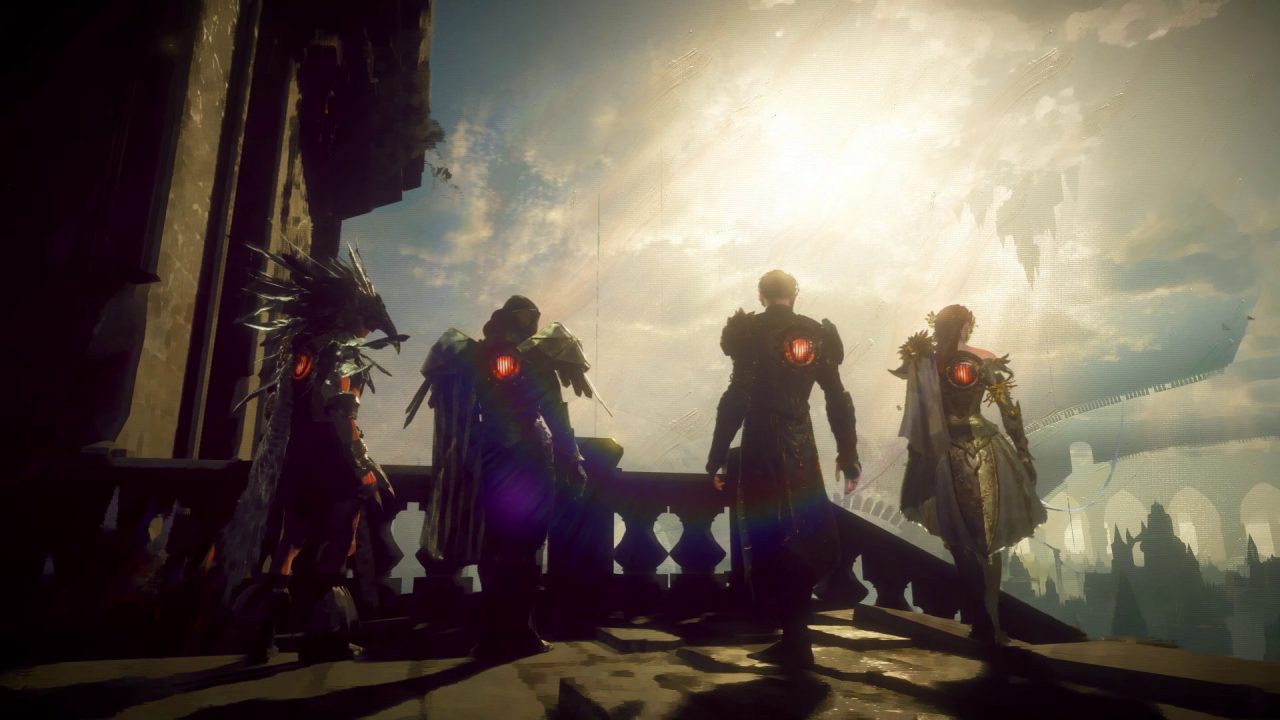 The ruins of Babylon can be stunning.

Moving on from the game’s combat, the dungeons available in this beta were visually lovely. The game presents a romp through a golden tower filled with ostentatious chests, shining magical traps, and mysterious devices. One of my favorite moments of the beta was activating a switch that caused a massive stone turret to sprout up into the sky, opening up a new part of the map. Babylon’s Fall captures the feeling of exploring a long-abandoned ruin filled with strange technology and magic.

During fights, the game can be visually confusing. The effects attached to attacks can sometimes be so large and opaque that it’s difficult to tell what’s happening for a brief time. Fortunately, this was only a problem for a few attacks, particularly with the hammer. Once I started using the hammer less frequently, the issue mostly disappeared.

Though my time with Babylon’s Fall was short, it left a clear impression of a game with a lot of potential as a four-player co-op action game that needs more polish to stand out from the crowd. I love the way the four attack system works with the equipment system to create interesting builds, but question whether the game does enough to avoid becoming just another action game. Despite these concerns, there’s enough here to keep an eye on how the game develops, especially if you’re a fan of the genre.

Babylon’s Fall doesn’t have a release date yet, but it is expected to release on Playstation 4, PlayStation 5, and PC.