That VideoGame Blog
PREVIEW / RECONNECT : The Heart of Darkness (PC)

I, like many, can get a bit stuck when it comes to the RTS genre. I enjoy playing the A.I, but it can get so predictable that the challenge will dissipate. When it comes to PvP in strategy games, I’m terrified because I’m more of a casual fan and think the other players are going to demolish me. So what is a casual RTS player to do? The answer could come in the form of RobotHeart Labs’ RECONNECT – The Heart of Darkness which sets out to accomplish what few, if any, have attempted before: an enemy A.I. that learns and adapts to how you play.


RECONNECT is very simplistic in design. There is no preset grid to place towers on, instead, it is open for the player to place nodes within a certain radius of each other. These can later be turned into different tower types, depending on the function needed. The different towers are just variously colored shapes on the nodes of your makeshift grid. The overall map is a mostly dark region with a mountainous background to navigate. Instead of a traditional fog of war, RECONNECT opts for nearly sheer darkness with a day/night cycle illuminating areas of the map at certain times. 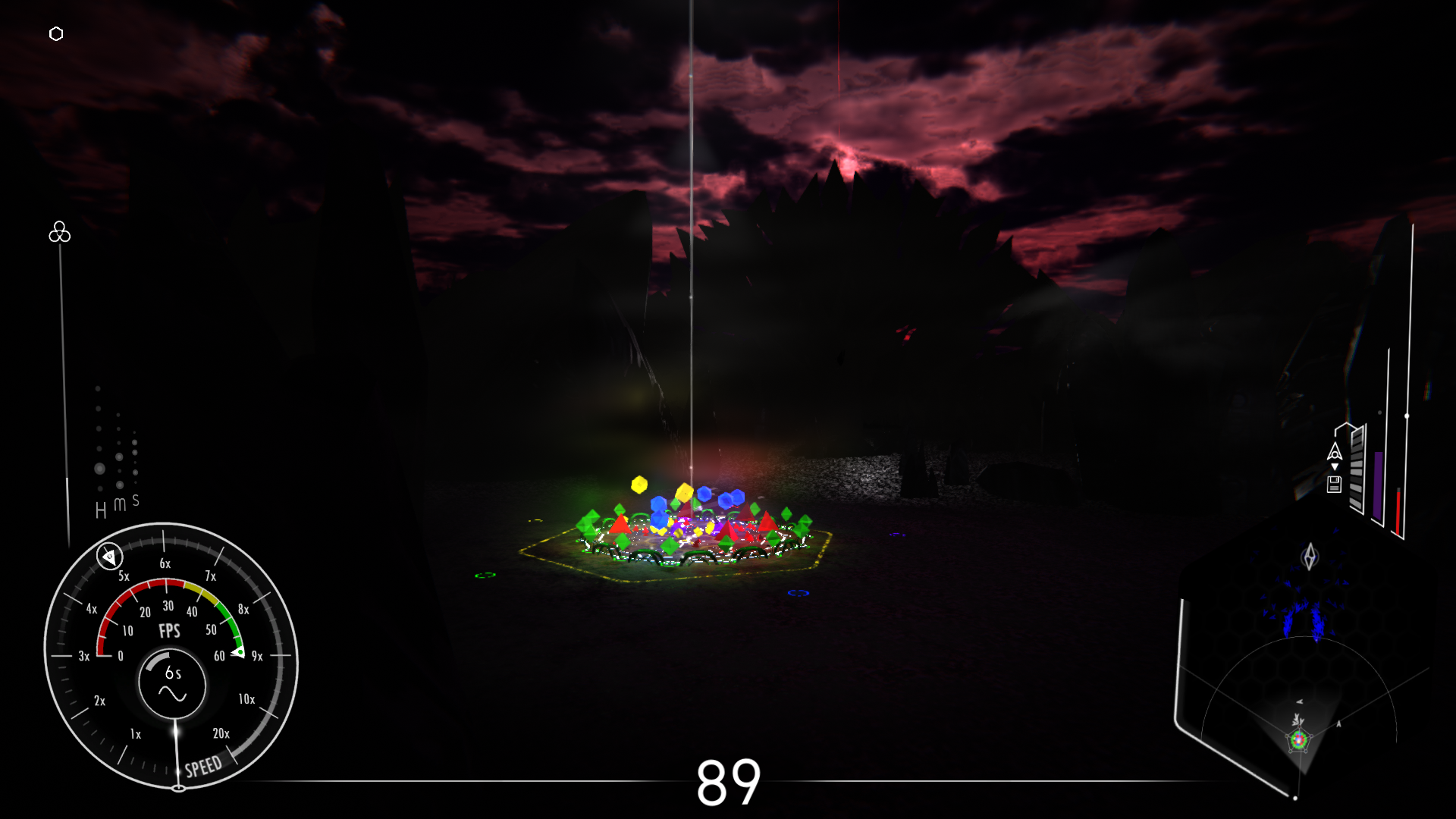 Upgrades and tower management in RECONNECT are handled by quants of light that travel your grid autonomously. These light sources can be frustrating to funnel to the correct area that you are focusing on, creating a hurdle that is at odds with the nature of the game. The enemy A.I. is constantly learning and adapting, so you as a player need to make adjustments on the fly. However, this ability is hamstrung when your quants of light don’t travel the grid the way you want them to and you find yourself struggling to build in a new direction because all of your light is stuck bouncing around in the wrong area. The game offers switch towers to remedy this issue, but they aren’t very intuitive to implement, and by the time your grid is built up and you realize you need switches, you cannot add them without tearing your grid down. 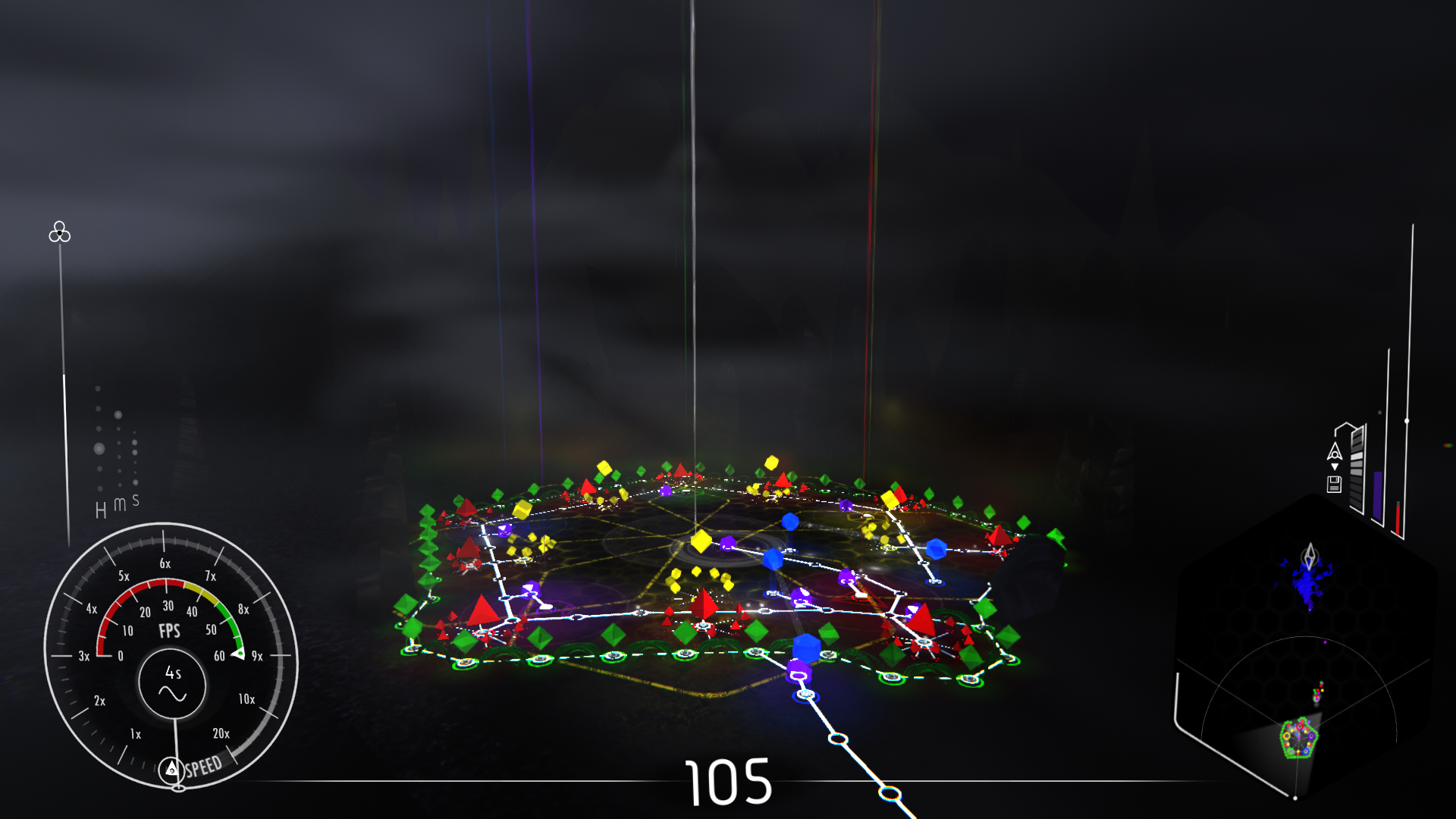 RECONNECT has an effective and very catchy mix of ambient sound that comes in the form of an electronic soundtrack. I was frequently finding myself bopping along to the musical score, occasionally not paying as much attention to the game as I should have been. The sound effects mix together with the OST so well that you start to believe it was planned out beforehand. It’s a wonderful example of in-game music that enhances the discovery experience of the game. 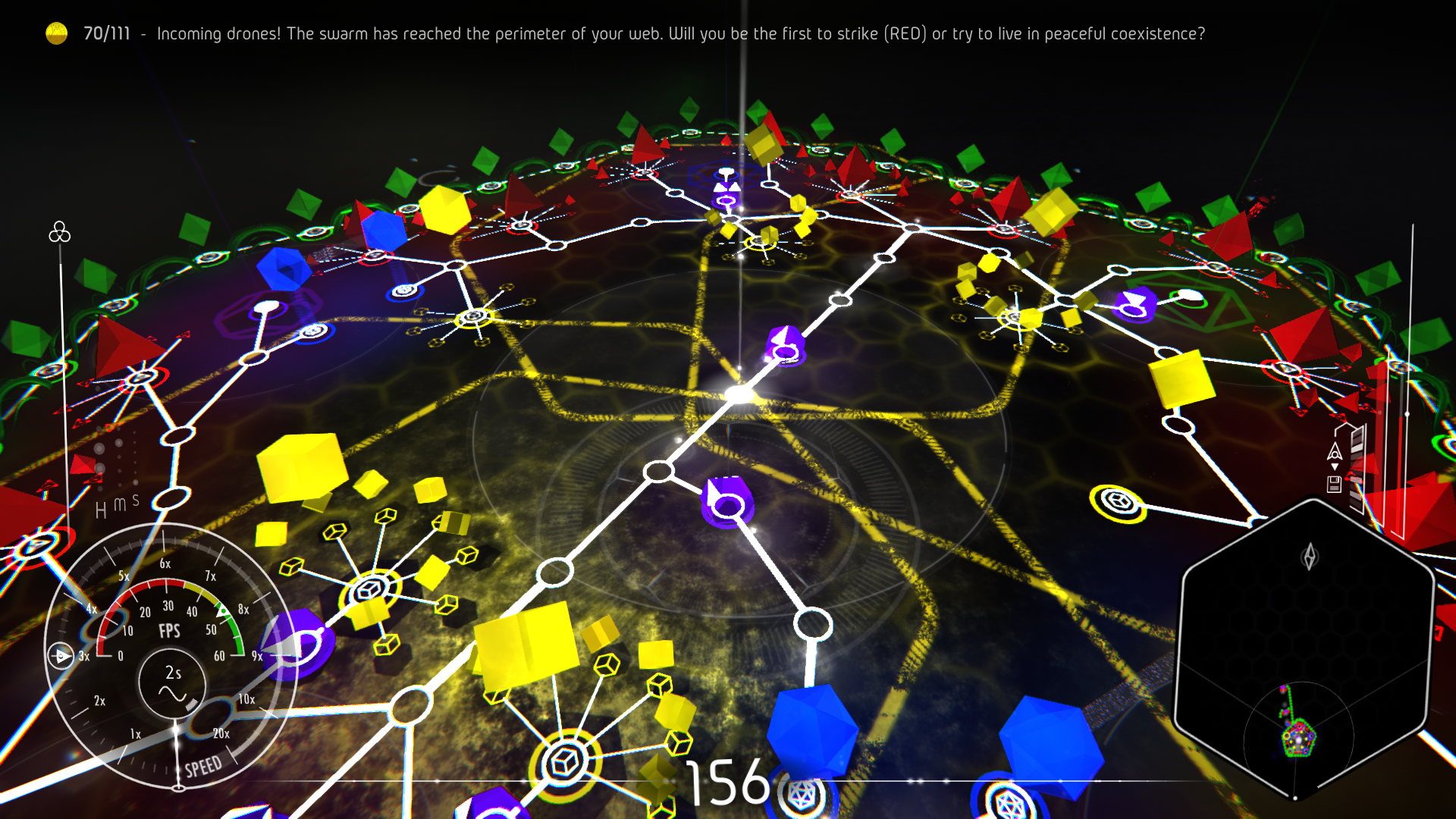 In general, RECONNECT is pretty hands-off when it comes to instructions. Just like the self-learning A.I, you are left to your own devices to explore the world, functions, and tactics of the game and ultimately attempt to retake the Heart of Darkness for a victory. It is pretty refreshing to be on even footing with the enemy in a completely new experience; the feeling of discovery in RECONNECT is very rewarding as the knowledge you get is immediately applicable and carries over with you when you refresh the map. 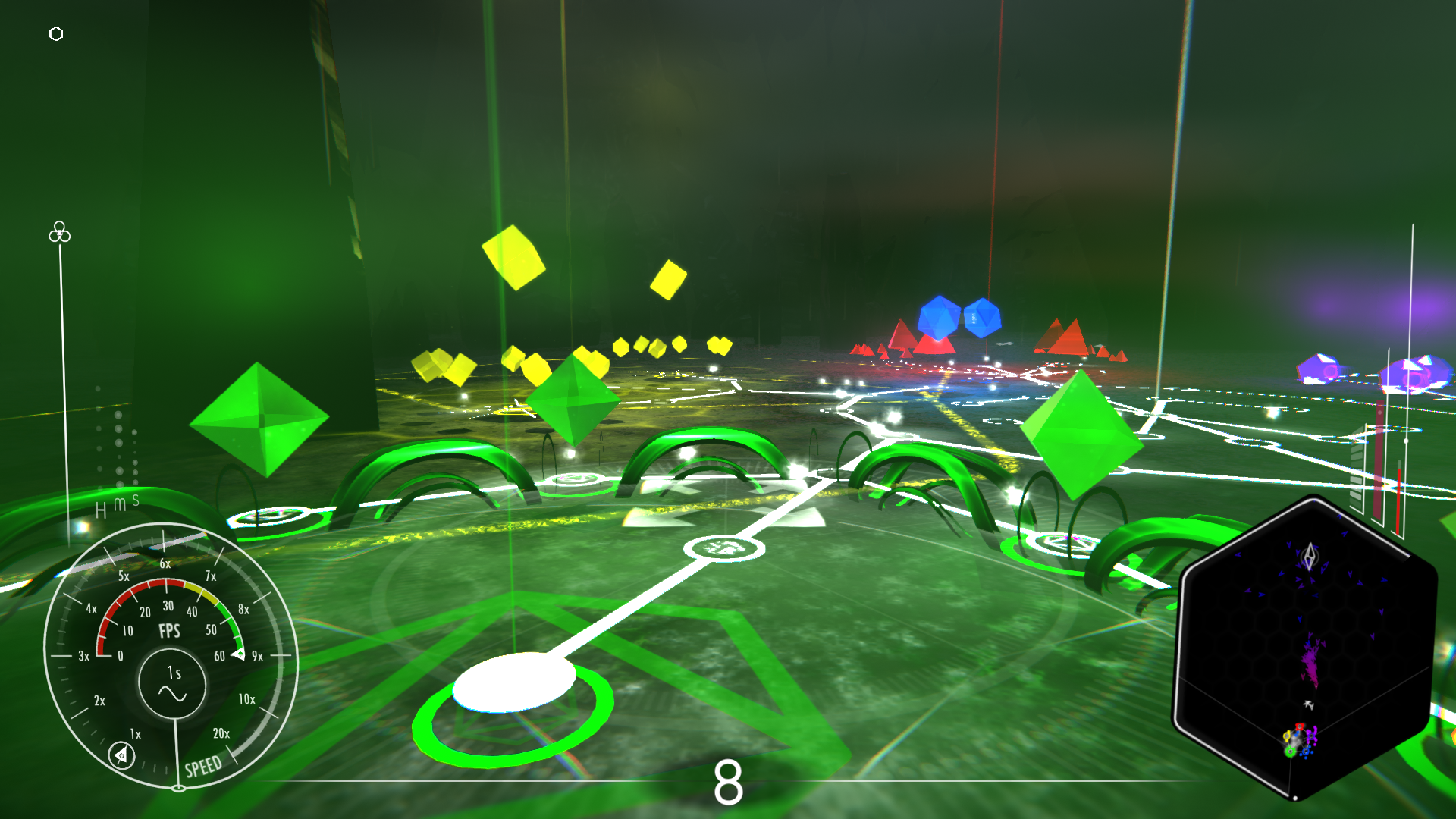 Carrying over what you’ve learned is especially vital because there is no option to save progress and quit out of the game. Anytime you exit to the title screen, the game resets and starts over fresh with a new map. The only thing carried over is what you have personally learned and the tactics that the A.I. has learned, making them more intelligent at the start of the next game. This can be frustrating due to the nature of the game requiring the player to sink multiple hours into the map for both the A.I. to adapt and for the player’s upgrades to get to a point where victory is even possible. It is asking a lot to have a player clear 3+ hours of their schedule to complete a match.

The pacing of the game can be sporadic due to the nature of A.I. learning. Each iteration of the A.I. gets smarter with recursive logic, but it can take a while just for the drones to know how to even navigate the map to find your base. Once the A.I. finds you, it attempts attacks and adapts to the way that you defend against it. During my first game, I built a solid defense for the A.I. to run headfirst into while I flanked around the side to reach the Heart of Darkness. However, the A.I. adapted faster than I expected and split its forces enough to keep up the attack and also attack my progress faster than I could build, locking us in a stalemate. 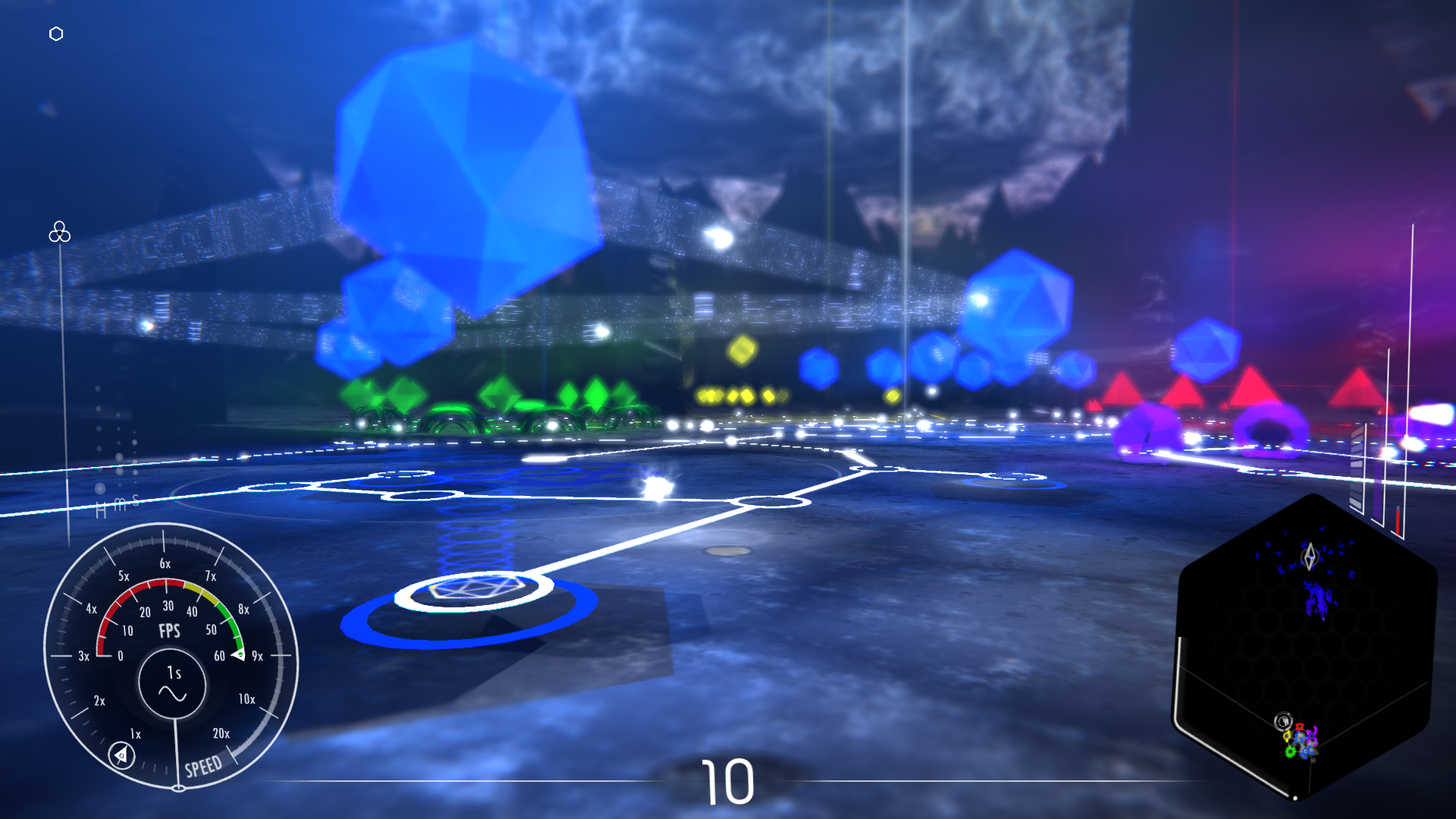 As RECONNECT is still in Early Access, there are of course some issues that we would like to see addressed. For example, you can’t connect two separate paths of your grid to form a loop, they have to branch out independently. Also, the game was designed with a gamepad in mind, making mouse and keyboard play awkward and unwieldy. When your grid expands outward it becomes incredibly difficult to navigate. Instead of being able to scroll through the map, you have to jump from node to node, which is incredibly hindering when trying to expand one area and defend another at the same time.

All in all, there is a skeleton of a great game in RECONNECT, but this needs to be fleshed out and improved upon. Once you explore and dig into the game you begin to spot issues and some of these problems make it hard to come back to the game in its current state. A simple save system would do wonders for this title. RECONNECT is definitely a unique and eclectic experience that I personally have never had before and it’s worth following the development of these ideas to see where RobotHeart Lab takes this game as it progresses through the stages of Early Access to final completion.


This preview is based on an early access copy provided by the publisher.


The post PREVIEW / RECONNECT : The Heart of Darkness (PC) appeared first on That VideoGame Blog.