Who likes a good side-scroller, then? This is one of those genres that was made for the amusement arcade. Shove your coin in the slot, hit a button, get finger cramp trying not to get blown to bits by far too much happening at once; avoid any impending seizures from the flashing objects, die, rinse and repeat. This was literally a general mantra for twelve-year-old me and I absolutely loved every second of it. Shift forward twenty-odd years and the side-scrolling shooter is still one of my favorite things to get involved in. This is where Cotton Reboot! comes in. It’s frantic, colorful, lethally addictive and it’s been burning flashy objects into my retinas for a little while now. You’re absolutely going to want to hear more about this amazing little blaster and I’m absolutely about to tell you.


So, Cotton Reboot! is a reboot, (astonishingly,) of Cotton: Fantastic Night Dreams. You will be taking the role Nata De Cotton, a witch with a serious love of candy in a story that’s batshit crazy in the best possible sense. I mean who wouldn’t go face to face with a demonic army just to lay their hands on a really big version of their favorite snack? Literally everyone? Yeah but there are fairies that need saving too so we’re all good.

In Cotton Reboot! You will take control of Nata and Silk her fairy companion, as they blast across seven zones taking out waves of lethal nasties all hell-bent on ending them with a range of explosive and utterly lethal spells. All this in a bid to collect Willow, a very special sort of fairy magic that just happens to resemble boiled sweets. You must also save the fairy kingdom in the process. On top of this, there are only a few demon lords to worry about so nothing too major there. 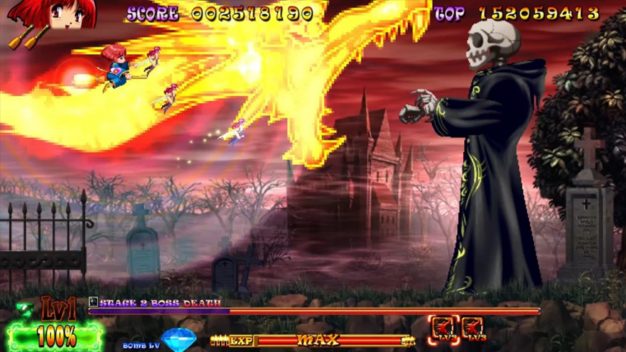 
Cotton Reboot! Is undeniably a fun game. This is the sort of thing you want to get yourself involved in when you aren’t too bothered about using the old gray matter. This title is frantic, fast, and flashy and encapsulates all the things that you want from a really good shooter. If you’re the type of person that can’t live without those high scores and will play over and over until you get them then this is absolutely the game for you.

Equally, those of you that want to get a perfect run on a game and see playing past those three allowed continues as being absolute heresy will find an awful lot to love here. For those of us that complete a title and move on or aren’t too fussed about leaderboards there might be less to keep you hooked and I’ll explain why in a moment. Before I start complaining though I want to make clear that Cotton Reboot! does the things it’s intended to do nearly perfectly so I’m not bitching about the essence of the game; there are just some things that might put certain players off. 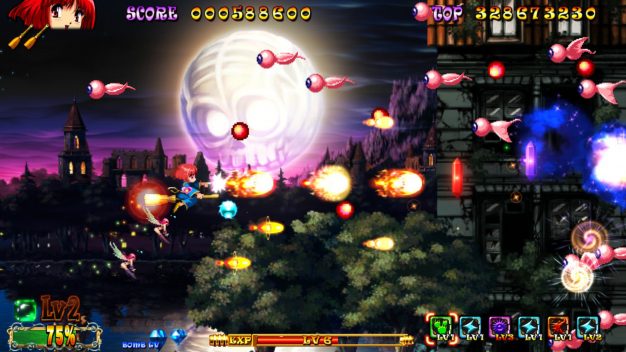 The rebooted graphics truly are gorgeous.


There are just a few issues that stop Cotton Reboot! from being a truly memorable game. The first of these is the story. This isn’t a very long game and the story is in Japanese with subs. This in and of itself is fine but you only really get snippets of what’s going on between levels and there isn’t really enough there to make for anything remarkable. Now, I fully understand this is a shooter and doesn’t need to be story-heavy but I would have liked to have seen a little bit more than was presented.

You get Silk as an unlockable playable character and having her story would have probably been enough to satisfy. I’m aware that this is a reboot and this wasn’t there in the original game, but I think it would have been a fun addition and would have rounded the experience off a little better. I’ve literally told you the whole story in the previous passages apart from the ending which in true Japanese style makes absolutely no sense. This isn’t so big an issue that it’s ruining a fabulous experience, it’s just something of note. 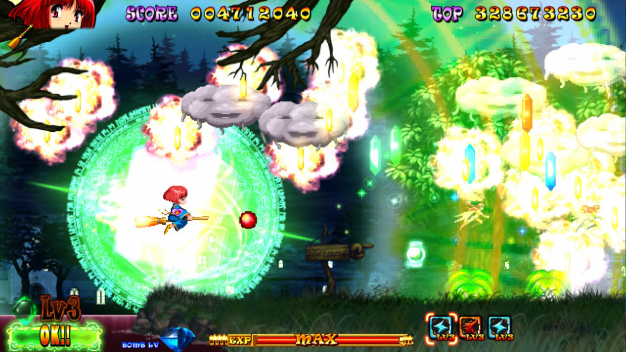 Secondly, if we’re playing across seven unique zones I’d like to see seven of them. What we actually get in Cotton Reboot! is six unique worlds and the last level which is just a boss fight. I’d like to have seen a level attached to this or have to fight the final boss in stages across one zone. The final battle isn’t particularly difficult, (if you’re not bothered about continues,) and it’s just a fairly lackluster boss so there isn’t a real feeling of accomplishment when things come to the crunch. Again, it’s all okay, I’m not complaining as such but I’d have liked to have seen a bit more here. As a little addition to this, all of the boss battles are fun, when you finally work out how to telegraph the moves I’m not sure whether I’d call them difficult though.

The last irk isn’t really the fault of the game but something I think needs to be noted. The graphics are gorgeous and the enemies you face are varied, cute, and really deadly. The problem is that you’re moving so fast and concentrating so hard on not getting blasted to bits you don’t really take it all in. This, I feel is a general issue that a lot of shooters suffer from but if you’re going to put all of that work into making your game look stunning it makes sense to give the player enough breathing space to appreciate it. 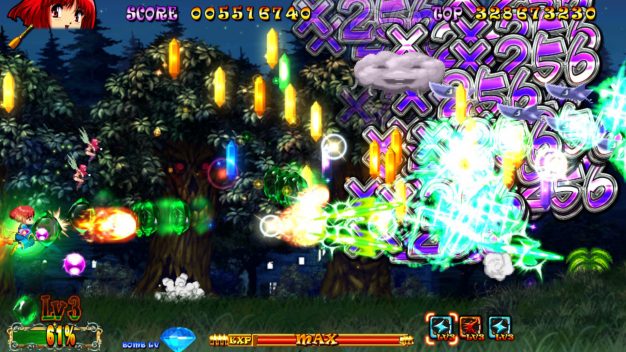 It’s all about the scores! Gotta grab those multipliers while you can.


Ultimately these are pet peeves and little things that shouldn’t ruin what is going to be a very entertaining experience for you. What might be a little more of a problem is the question of value for money. Cotton Reboot! is ringing in at nearly £35.00 and I just don’t think there is enough content there to meet that asking price. You get several modes which are fun. The main Arrange mode which I completed with both characters in a couple of hours is a beautiful and fairly faithful recreation of the original game.

Secondly, you have the X68000 mode, which is the original arcade classic and offers levels of difficulty and therefore should afford more of a lifespan and finally a score attack mode. The last one of these is timed so is really likely to appeal to the score warriors out there. With all this being said I still don’t think there’s enough to warrant that rather large price tag. If there were other things to unlock or in-game achievements that gave you something other than badges it would keep pulling you back, but sadly none of these things are present. 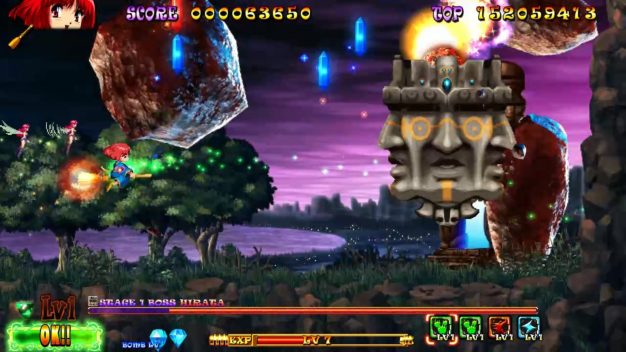 Ultimately you have a very slick, disgustingly cute shooter which is bags of fun. Everything plays and looks great and apart from the little irks I mentioned earlier there isn’t a vast amount to complain about. The real issue is that price point and the amount of bang for your buck that you’re getting here. If Cotton Reboot! were half the price I’d be telling you that you were daft not to give it a go. If on, the other hand there was a ton of content to get stuck into, be it in gameplay or via unlockables, artbooks, museums, etc. I’d be saying that the price was well worth the product. In this particular case, I don’t think I can say either of these things. If you want a really fun nostalgia fest this is a great way to go, if you’re worried about the content of your pockets, though, you might want to think twice about this title for now, at least.