Back in 2018 when frequent Nintendo collaborator Camelot Software Planning released Mario Tennis Aces for the Switch, my hype train kicked into overdrive. The revival of one of my favorite series was on the horizon, and 3 years later it all came together with the release of Mario Golf Super Rush. This is the first console entry in the series since the Gamecube title back in 2003 and the first title in the series at all since the 3DS game in 2014. So I waited with baited breath after the Nintendo Direct earlier this year announced the game officially until I could finally start the game up and get back to the Mushroom Kingdom links. 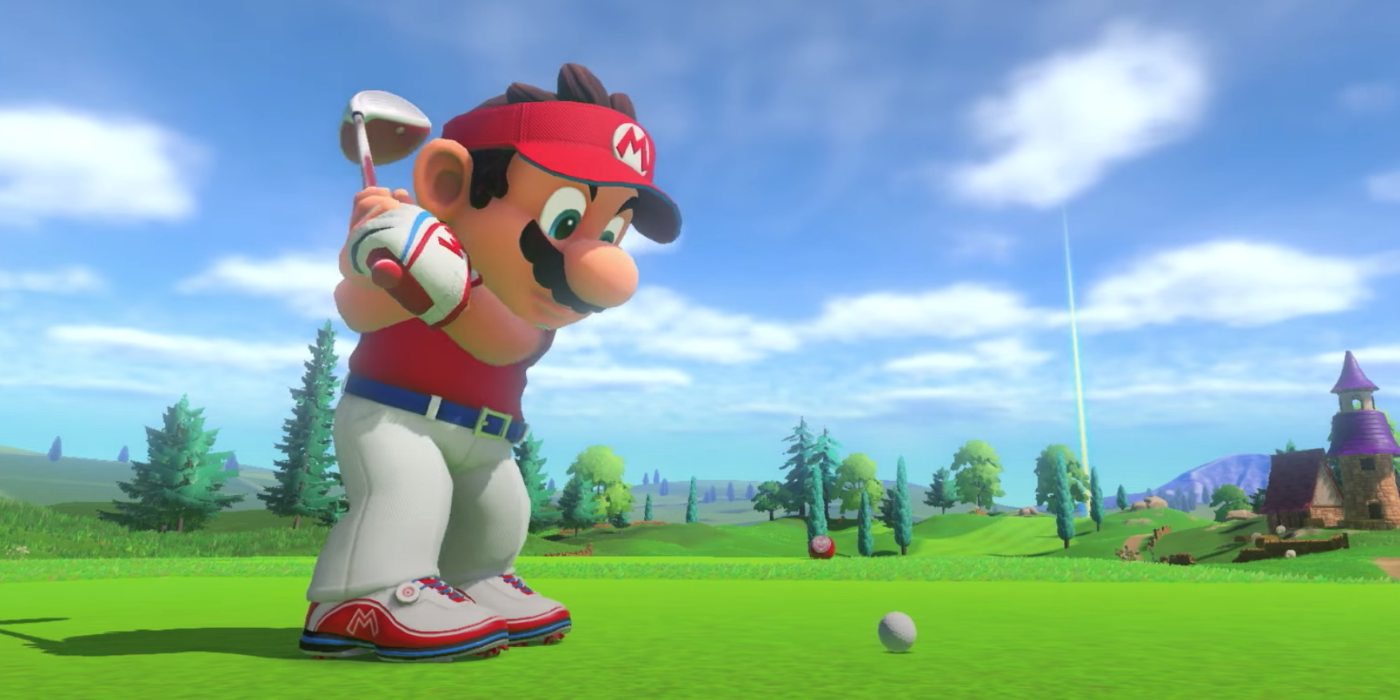 One of the immediate gameplay changes I found in Super Rush was that Camelot removed the Fade/Draw system from the previous entry on 3DS that caused each character to have an automatic curve to their shot. This was replaced in favor of a system that allows you to control spin at different points to customize and fine tune shots, with each character having different amounts of spin available to place on the ball. Playing Super Rush, I felt a level of control over the ball that I haven’t had in a Mario Golf game before. 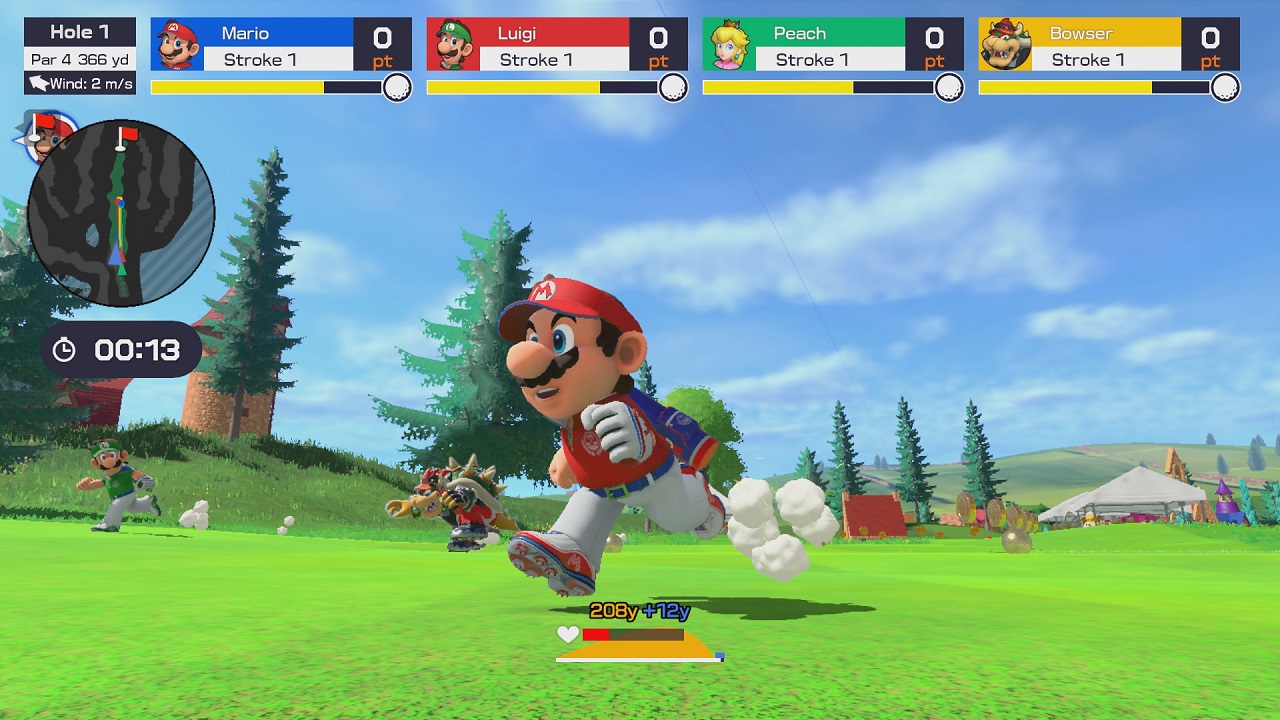 Takes advantage of the Switch’s gyroscopic controls to offer motion controlled golfing, in a similar vein to Wii Sports. You can use a single side of the switch controller to line up as if taking a shot and have it replicated with surprising accuracy. Any twist of the wrist adds fade or draw and top or backspin. Motion control adds a level of challenge that keeps the game fresh. For example, 18 holes on the beginner course with button controls I can regularly shoot at least -8, but with motion controls my first trip through the course I shot an embarrassing +18. 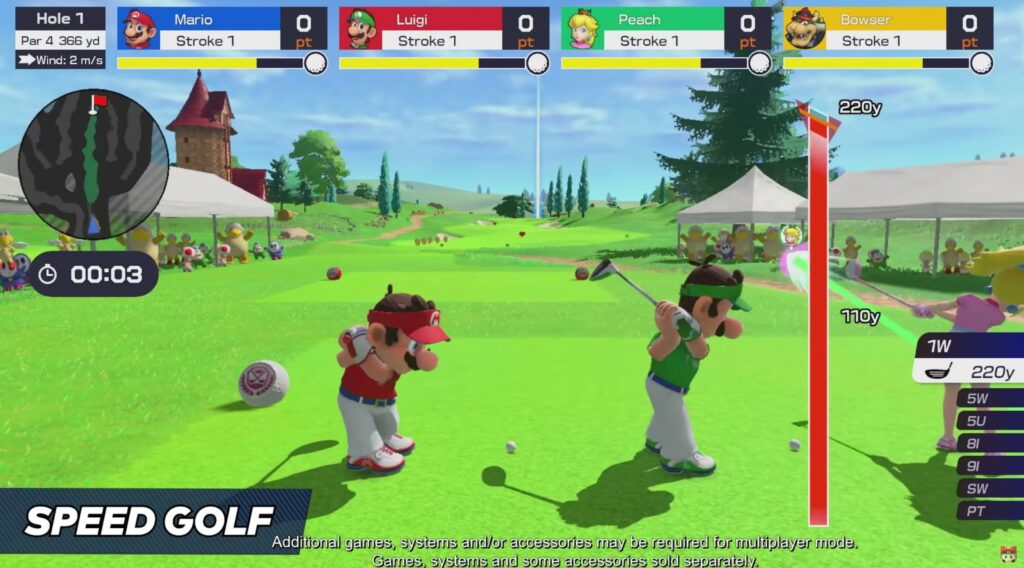 Mario Golf Super Rush adds brand new game modes to the series, Speed Golf and Battle Golf. Speed Golf adds a timed element to each hole, as well as the hectic fun of racing other golfers to your ball and using special abilities to knock them off course, setting them back and increasing their time. In Speed Golf, finishing the hole as fast as possible is just as important as having a low amount of strokes, making it a fun break from standard play. Battle Golf is a similar concept to Speed Golf, except instead of racing to finish a hole on a course and moving on to the next one, all 4 golfers enter a dense arena with 9 holes and race to be the first to sink 3 holes. 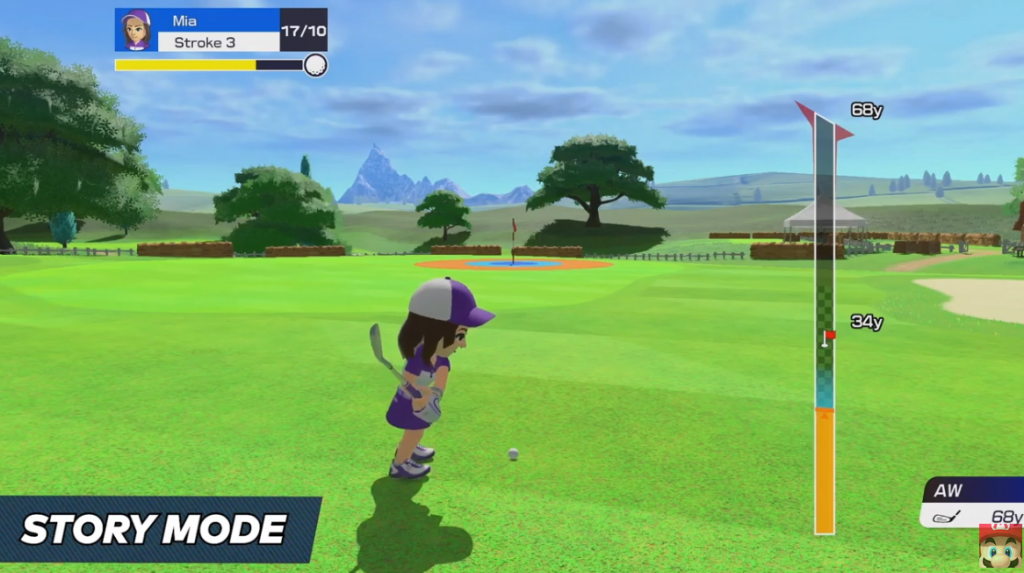 Super Rush also brings back Adventure mode, marking a return of Camelot’s RPG golf systems from the Gameboy days. This mode allows you to train your rookie Mii in the ways of golf and level up their stats until ultimately getting on the level of golf champs like Mario and Bowser. While this mode is a ton of fun and a welcome return to the series, when compared to its Gameboy counterparts it is much shorter and less significant to the whole package. The adventure mode is especially found lacking when compared to its contemporary, the 2017 release of Everybody’s Golf on PS4, which places a strong focus on building and developing a golfer and hits the sport-RPG sweet spot. 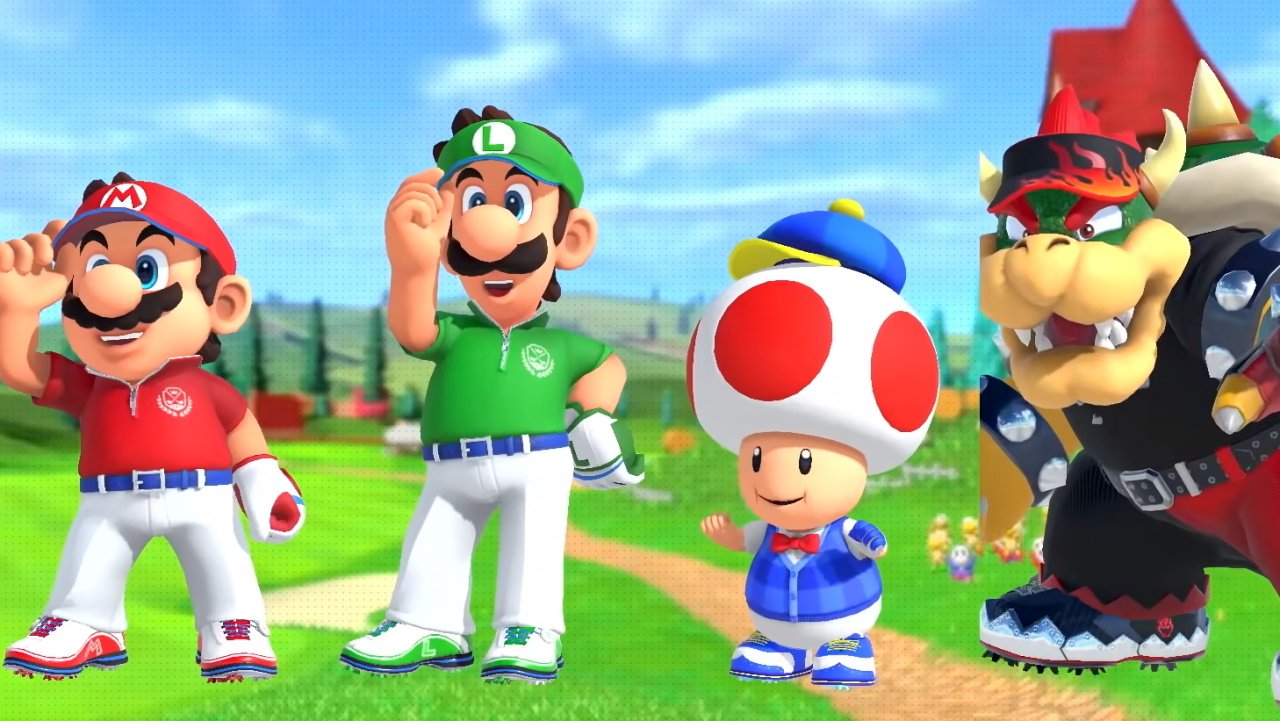 In my view, a reason Super Rush seems to have a lacking adventure is because the game only features 6 courses. This is down from Mario Golf World Tour’s 16 courses on the 3DS. Even the last console Mario Golf way back in 2003, Toadstool Tour, featured 7 courses. While 6 courses with 18 holes a piece is nothing to scoff at, the holes can feel repetitive and don’t really do enough to have that Super Mario flare. Sure, some holes will have some familiar enemies such as Thwomp and Pokey, but the majority of them just feel a touch generic and don’t utilize the IP. You’ll also be playing these holes a lot if you intend on unlocking all of the club sets for each character, so the generic nature of them can grind over long play periods. 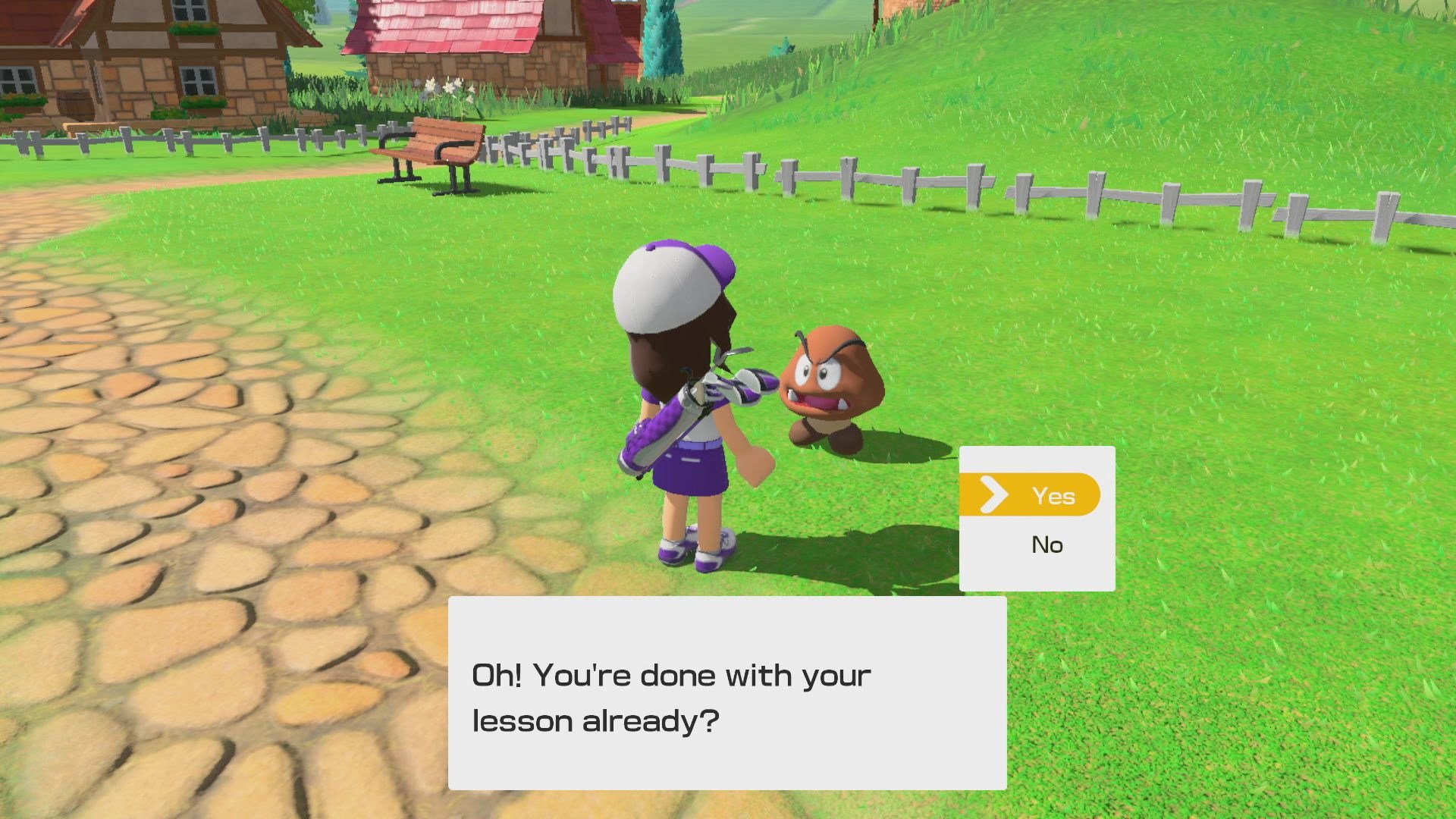 Speaking of not utilizing the IP, Super Rush also feels a bit lacking in the number of playable characters. Super Rush has 17 playable characters, which is again down from World Tour’s 21 golfers. While I can appreciate newcomers to the series like Pauline and Chargin’ Chuck, the Mario universe just feels ripe for the picking for a sports title like this and 16 characters plus a customizable Mii just feels like it’s being underutilized. In the adventure mode there are even character models for Toadette, Birdo, Koopa, Hammer Bros, Dry Bones, and more but none of them are playable. 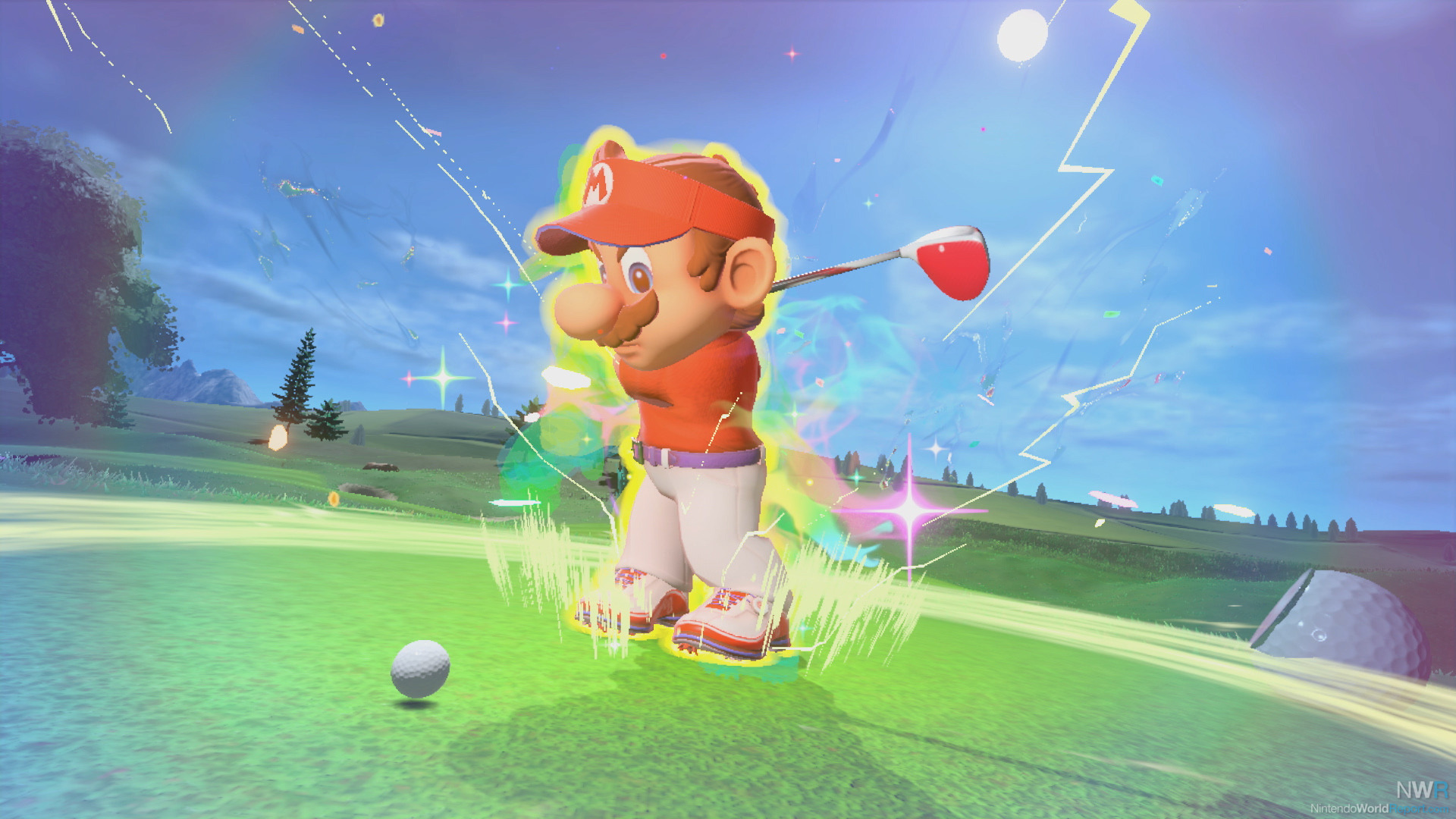 The characters in Super Rush feel less distinguished from one another than they did in World Tour. Each character ideally has different stats and super abilities, but they still feel pretty similar to each other. In World Tour each character had a distinct fade or draw to their shot that you have to compensate for, but in Super Rush each character hits more or less the same with slightly varying amounts of power and control. While this makes the ball easier to play in every situation, it removes a part of the unique play style that came with each character. The super abilities also have potential to differentiate the players. For example, Boo possesses other players’ golf balls giving them an exaggerated curve and Yoshi turns other balls into eggs and harshly affects the way they land after being hit. However the majority of characters just have a unique animation before hitting a shot that does the same thing as a bunch of other characters special shots, which simply flies in a straight line and knocks other players’ balls out of the way. 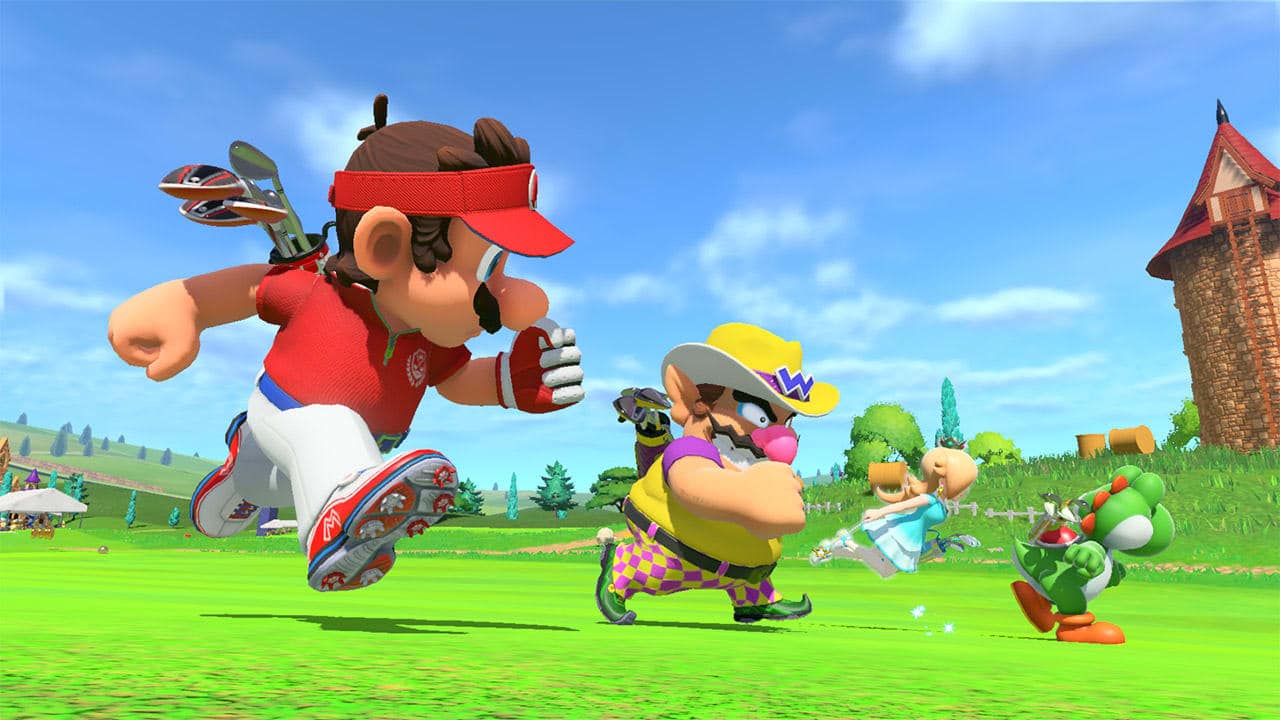 Mario Golf Super Rush is a fantastic return to one of my favorite sports series after a long 7 year absence. While delivering a mechanically tight and enjoyable arcade golf experience, there are some hitches and faults along the way. A bit light on content and a noticeable lack of that special Nintendo flavor that would go so far in really setting it apart from other arcade golfers certainly bring down the replayability of Super Rush. However, there is a lot of fun to be had in testing your skills, rushing through courses as fast as possible, or battling other golfers online with the network play features. Despite the faults, Mario Golf Super Rush is a refreshing addition to a dormant series and a fantastic part of the growing Nintendo Switch library.