College is a wild and wonderful time for a lot of people. You get some of your first tastes of freedom, open your eyes to new experiences, meet a lot of new people, and ultimately take baby steps into the real adult world. What happens when those baby steps feel more like launching yourself into the deep end of a pool with no ability to swim? That feeling of being overwhelmed, desperate, and lost is not uncommon with the 20-somethings of the world today. In Humble Grove’s minimalist adventure No Longer Home we get to peek into the world of two people in the midst of that time of confusion. 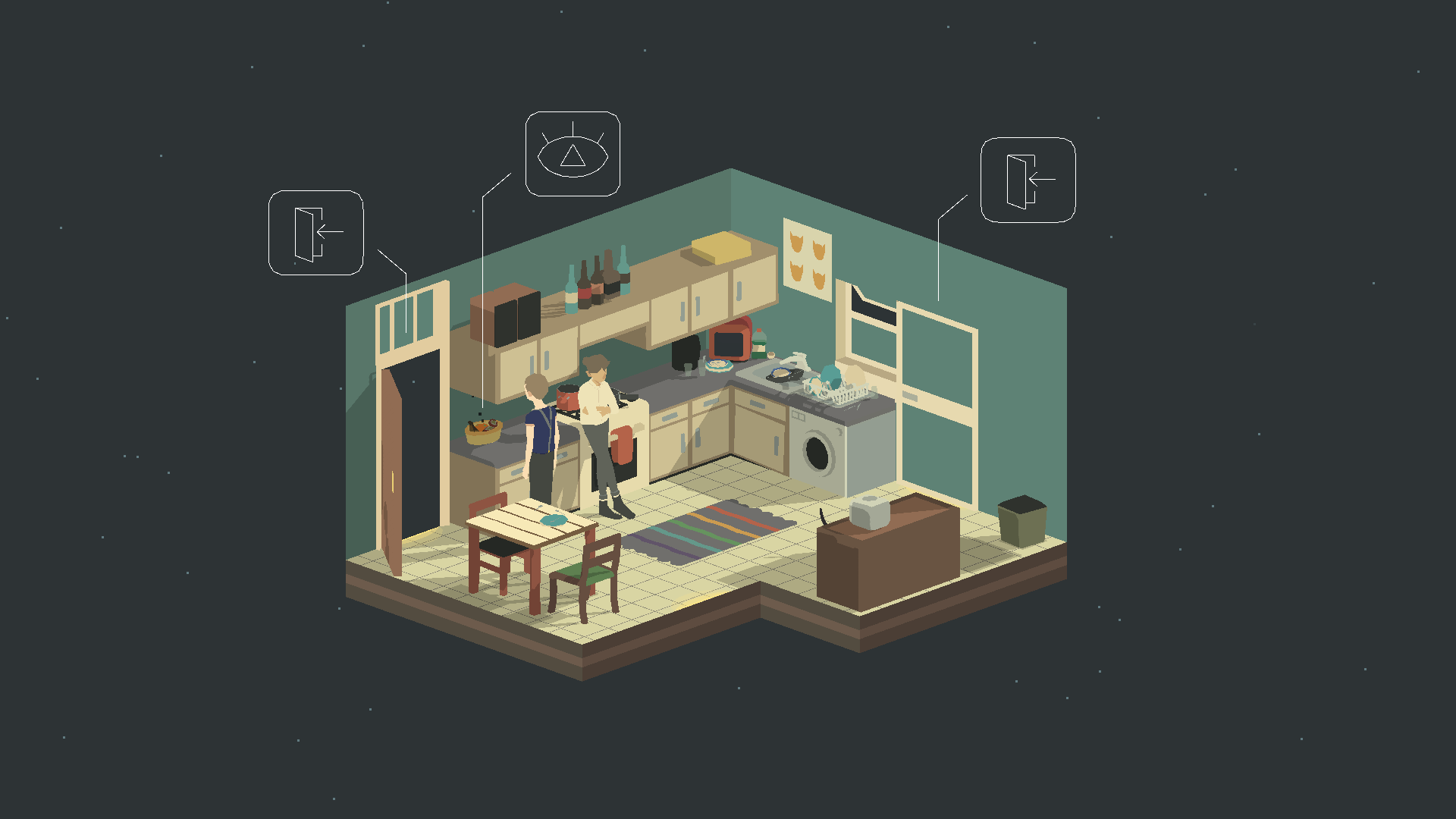 No Longer Home is a slice-of-life look into the world of main characters Ao and Bo. The pair are recent art school graduates struggling to find work on top of dealing with a tumultuous living situation. Staying in a flat in London, Ao and Bo along with the rest of their roommates are coming up on their moving out day and struggling to see their own paths.

Matters are made even more complicated due to Ao being in London on a visa that’s about to run out, requiring them to go back to Japan. These struggles are addressed and processed in strings of lengthy conversations and observations by the two main characters throughout the game. There are light point-and-click adventure elements, but the priority of the game rests on the conversations to be had. 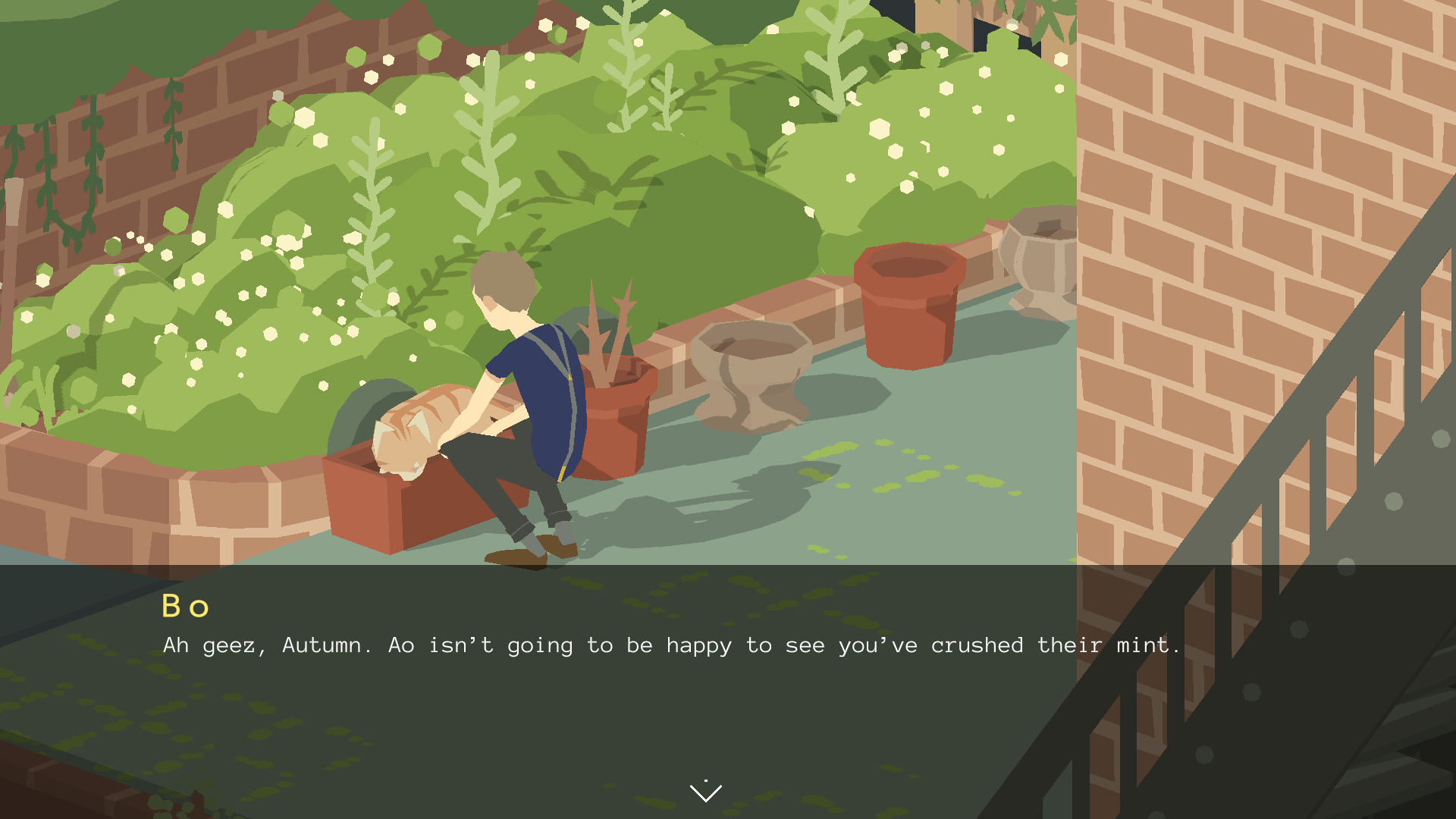 The two main characters, Ao and Bo, are nonbinary and the game does well in explaining that and their feelings about it in the prologue. Their identities and struggles, which come with non-conforming gender, are subtly peppered throughout the game. Oftentimes they manifest in small interactions like not being able to see one’s true self in the mirror or reflecting on aspects of their upbringing and how it clashes with how they live currently.

There are also some metaphysical manifestations in the form of strange monsters that represent the mental demons of the characters. Coming in to point out the characters faults, antagonize them, and stick around as a lingering reminder they can’t shake off. This aspect of No Longer Home, although sparse and unobtrusive to the main plot line, is done exceedingly well. 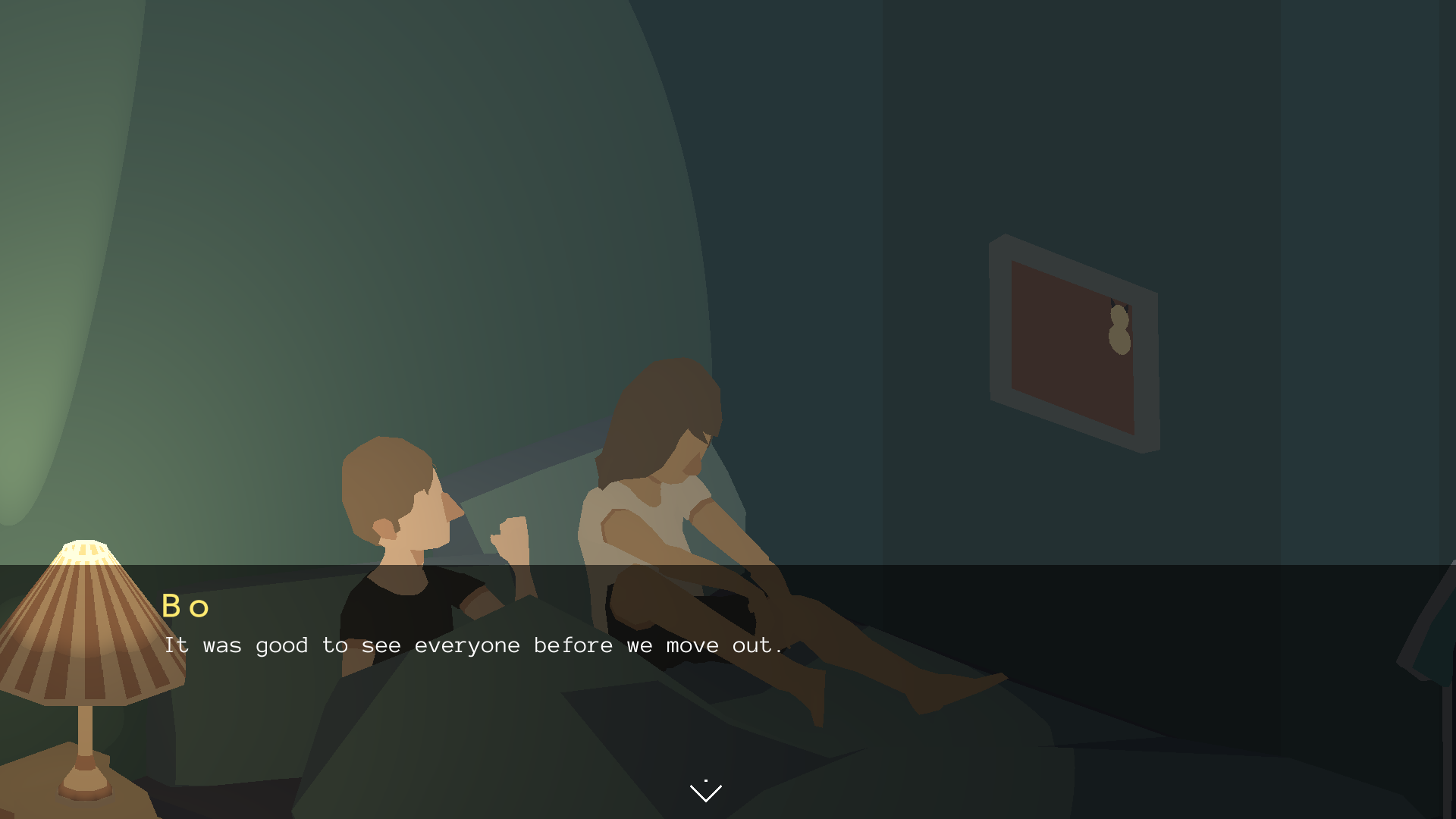 To say No Longer Home is a journey of self-discovery would be ascribing a lot of undue credit to the game. Not much is really discovered by the cast that wasn’t already apparent and addressed already. It feels more like 2 hours of the main characters retreating and hiding away in themselves whilst keeping up mundane conversations with their peers until the game just ends.

No Longer Home can’t shake the feeling that it is an art school grad’s vanity project, but there’s just not enough meat on the bones of the story to carry it through its short running time. Almost feeling like it is dripping with pretension, the story jumps between 2 characters as they lodge complaints about their housing situations, job hunting, the lack of viability of an art degree in the economic climate, the new railway system in London, and all sorts of meandering small talk in between. When something happens that you think is going to spice up the story in some significant way, like finding a floating ball of unknown geometric shapes in the bedroom, it’s just dropped and never addressed again in favor of more small talk. 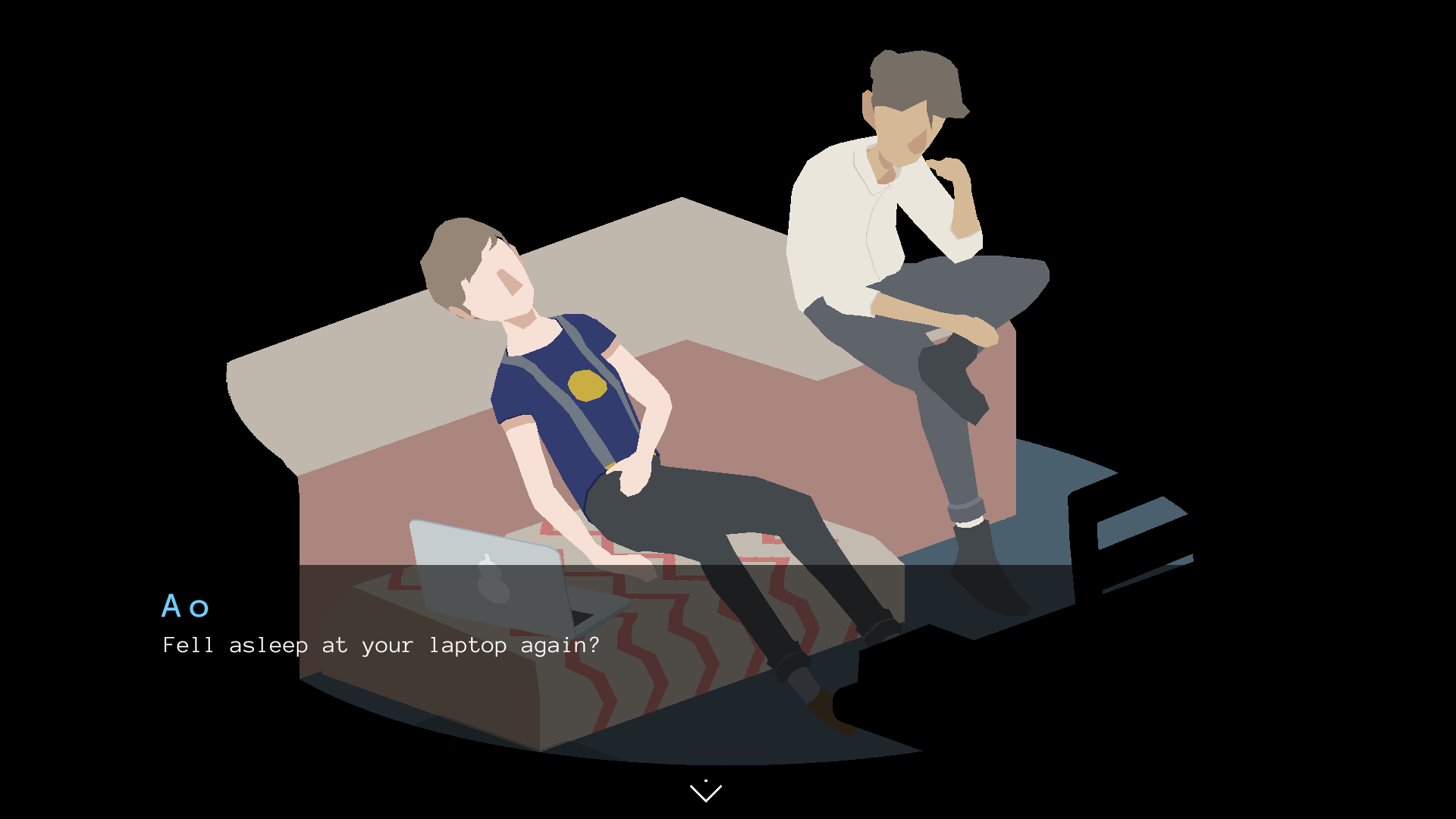 No Longer Home loves its small talk so much that at one point all of the tenants of the house gather to play a video game and it ends up being a text parsing adventure game that eschews magical scenarios for more meandering deep thoughts about life. In the game within a game the character finds a cave in the woods with an elevator in it that takes them to an art school that rents out classrooms as apartments. It’s literally such a boring revelation that I thought the game was joking, but it’s played off as completely serious.

Thoughts on this game are going to be very dependent upon where the player is at in their own life. I can see how No Longer Home could resonate with a group of people in their early 20’s that have recently graduated college and feel lost in the grander scheme of things. If you are older and past that point, like myself, it all feels like faux deep conversation that’s repetitive at every level. If you’ve been through that point in life or have been going through it for a while now, there’s nothing in No Longer Home that you haven’t heard and processed several times over already. 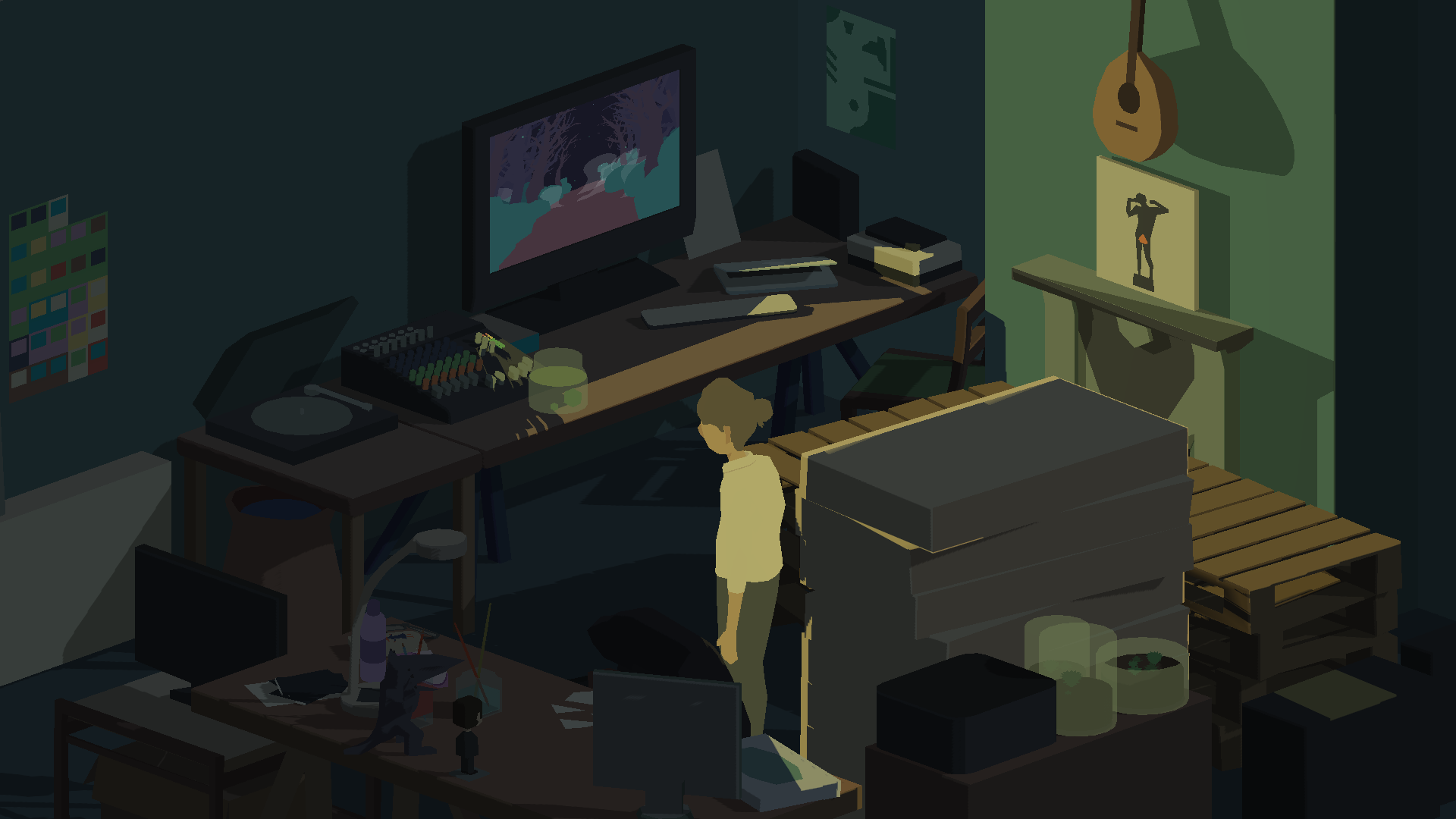 There are parts of No Longer Home that I love. The approach to gender and mental health are portrayed very well. However it feels like those parts are just a small thread of a grander tapestry that is just not very interesting. The bulk of the conversations are either painfully dull or try too hard to come off as deep and philosophical on the concept of life under capitalism. It’s the video game equivalent of reading a Twitter feed about housing development and availability. Normally a short running time for a game can feel like a drag, but I actually felt some relief when I saw the credits roll because it meant I didn’t have to listen to art students talk about moving out of London anymore.

The post REVIEW / No Longer Home (PC) appeared first on That VideoGame Blog.