The Difference Between Computer Games and Video Games 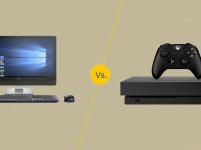 Computer Games vs Video Games.
Is there any real difference between computer games and video games? Read on

PC games have always been commonly referred to as computer games since they are played on personal computers. The first computer games were puzzle games, card games, digital board games, Chess, and strategy games. The earliest graphics were very primitive; in fact, one of the more popular games was Zork, a text-based game. The VIC-20 home computer (circa the 1980s) let you program your own simple games by typing in the code, which inspired a whole generation of programmers. Today’s computer games are much more visually intricate, with video cut scenes taking up a big part of the game. I think this is what helped blur the line between computer games and video games. Modern computer games are more like interactive movies, not to mention they can be real-time simulations and realistic VR games.

While PC games are played on computers, video games are played on consoles, an independent setup of hardware. Video game consoles, tracing their linage back to Atari and Pong, are designed with the living room and TV in mind. The success of the arcade game Space Invaders started the trend of console manufacturers trying to get exclusive rights to arcade titles, with advertisements for game consoles claiming to bring the arcade experience home. Like the classic arcade games, console games have a game controller (joystick) instead of a keyboard. Early video games used to have primitive graphics, too, but now you can play pretty much the same video-intensive games on consoles that you can on computers.

For most people, the terms "video games" and "computer games" are interchangeable, but is there actually a difference?