While I’m somewhat familiar with the Ys series, my exposure to the games themselves has been limited to playthroughs of Ys Origin and Ys: Memories of Celceta, which I remember having fun with. But it had definitely been a while since I last delved into the shoes of lauded adventurer Adol Christin, so I was quite excited when the Nintendo Switch port of the ninth game in the series was released. Is the Switch version of Ys IX: Monstrum Nox a solid action RPG for the console, similar to Michael Sollosi‘s findings of the PlayStation 4 port? If being judged by gameplay alone, this port of Ys IX is certainly enjoyable. Unfortunately, the technical limitations of the Switch makes its weaknesses all the more apparent.

Ys IX: Monstrum Nox sees the intrepid Adol and his erstwhile partner Dogi visiting Balduq, a prison city with a rich history. No sooner have the pair made it to the gates of the city than Adol is placed under arrest and sent to the prison proper. While attempting his escape, Adol encounters a mysterious and rather cryptic woman named Aprilis who grants him the ability to change into a superpowered alter ego, the Monstrum known as the Crimson King. However, there is a catch to being a Monstrum: they are cursed to never leave the areas immediately surrounding Balduq and are tasked with battling nightmarish monsters called Lemures. Adol is not alone in his curse either, as five other Monstrum are soon revealed. The disparate group must learn to work together to not only protect Balduq, but to discover the looming mysteries surrounding the city and its infamous prison fortress.

Ys IX’s story is enjoyable, filled with interesting twists and turns along with likable characters. Standouts among the Monstrums include the surprisingly shy White Cat, the enigmatically logical-minded Doll, and the berserker Feral Hawk. Aprilis also has some truly excellent character growth and reveals over the course of the narrative. Other characters such as the supportive tavern master Chante, business-minded Carla, and the seemingly carefree yet inquisitive Marius are also very memorable. I came to genuinely enjoy my time traveling the various areas of Balduq and the prison while uncovering more of the plot and seeing how the cast interacted with one another. I also found the voice acting to be rather decent, with characters such as Chante, Raging Bull, and Doll being standouts amongst the cast. The localization is top notch, and I didn’t notice any obvious errors in the script.

Though as interesting and surprisingly compelling as the story and its characters are, the narrative is only one component of the game. Ys IX is first and foremost an action RPG, and in that capacity the title truly shines. There are different difficulty modes to choose from, and players are even given the choice to add accessibility options that provide clues on what to do next. This helps players tailor the game to their personal playstyle tastes, but that’s just the tip of the iceberg.

To traverse Balduq, players can run, jump, and use Monstrum Gifts: special abilities that give the Monstrums an edge both inside and outside of combat. Adol’s Gift allows him to zip across the field with relative ease, White Cat’s allows her to scale walls, and Renegade’s has players dive into shadows on the ground to avoid enemies and reach otherwise inaccessible areas. Doll’s Third Eye is also incredibly helpful in pointing out potential hidden passages. Fortunately, after a Monstrum officially joins the party, their abilities are shared amongst the group, so you don’t have to constantly change your party just to use one specific Gift.

Parties are comprised of three active members and three reserve ones, though reserve party members fortunately still gain experience and level up. Players take direct control of one character while the other two in the active party are AI controlled. I had no issues with the way the AI controlled characters fought, which usually isn’t the case in other games with similar mechanics. The character that players control directly has a wide assortment of combos and equipable skills that they learn through leveling up or with items. Every Monstrum has a unique fighting style to experiment with, as well as their own strengths and weaknesses. There are many ways to tailor your party to fit your personal play style. In my active party, I loved the brawler style of White Cat as my main fighter, though I also found merit in keeping the Crimson King’s quick sword strikes and Renegade’s magic projectiles on standby. Fortunately, switching between your party members even during the heat of battle is seamless, should you feel you need to mix things up. Combat is fluid and frantic, and I had fun just walloping on Lemures during the Grimwald Nox events or taking on enormous bosses as I explored the prison proper. 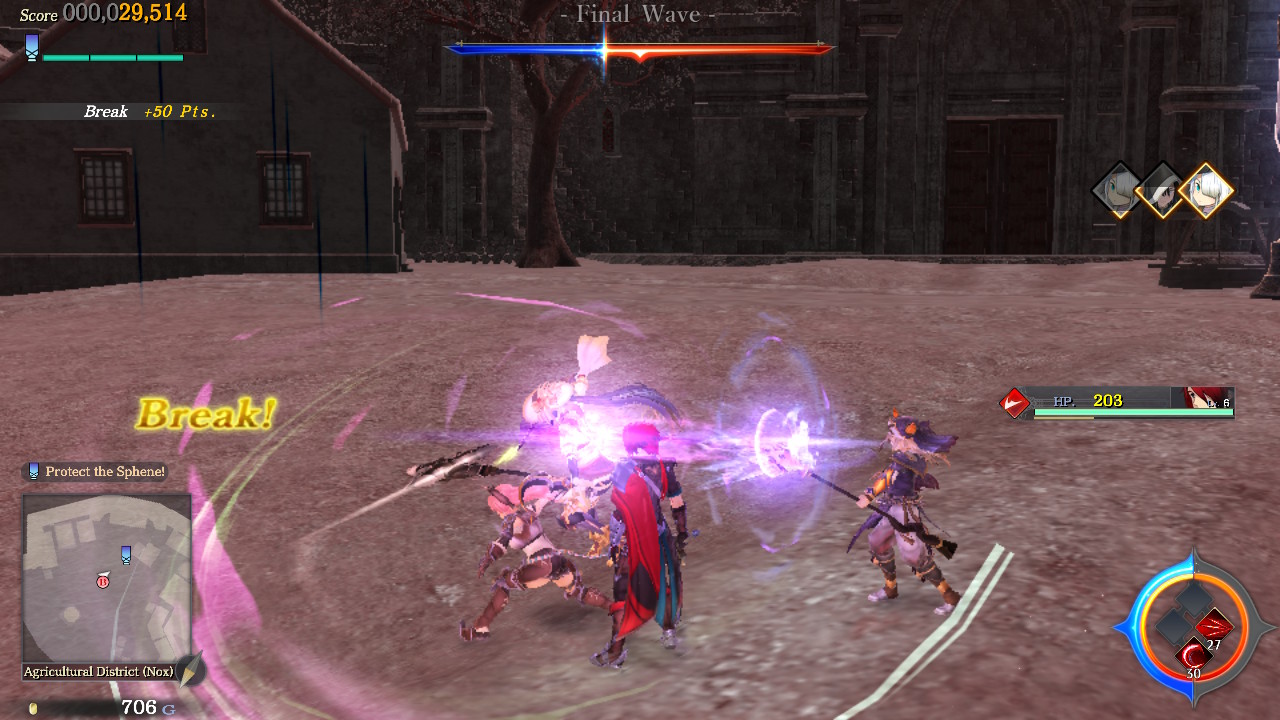 Fights with your active party are fast and frantic.

Thanks to the curse that keeps the Monstrums tethered to Balduq, certain areas of the city have to be opened up for exploration by filling up a meter that unlocks a special event stage called the Grimwald Nox. This can be done by fighting Lemures at various spawning points throughout the city, or by accomplishing side quests. Side quests are posted on a board at your HQ, a bar known as the Dandelion, or they can be found around town. These are surprisingly story-intensive. I’m used to games offering more mundane missions of this nature, so I enjoyed seeing what these side quests offered from a plot perspective. My biggest complaint with the side quests would be the time limits imposed on finishing them: there are some that can be easily missed if you aren’t wandering around Balduq every time you’re able to. Despite my best efforts, I accidentally missed two, so completionists be aware!

Once battles have opened up in the Grimwald Nox, you’re tasked with either protecting a magic crystal called a Sphene from numerous waves of Lemures or finding and destroying enough crystals in a given area under a time limit. A boss fight often finishes these up. The Monstrums and their recruitable allies over at the Dandelion all have support abilities that grant special bonuses during the Grimwald Nox stages as well. These special skills can be leveled up by increasing Adol’s affinity with a given character through gift giving and talking with them regularly. A rank is awarded after successfully completing a Grimwald Nox stage, with items doled out accordingly. At the Dandelion, you can further customize Grimwald Nox stages by using acquired items and materials to strengthen the Sphene or set and further level traps. I found these stages to be both hectic, given the sheer amount of things happening throughout them, and surprisingly strategy-oriented, thanks to how many different ways players can approach them.

Aside from Grimwald Nox battles, Adol and the other Monstrums traverse hostile terrain and obstacle-laden dungeons as well. While you’ll most likely rely on the Monstrum Gifts to get through these areas, there are instances where you take on the role of another character entirely who has no such Gifts. These gameplay sections play rather differently as a result and offer another varied layer to the game’s action elements. They also showcase Ys IX‘s enjoyable soundtrack. I found myself especially motivated to keep pushing through thanks to some of the boss and dungeon themes. 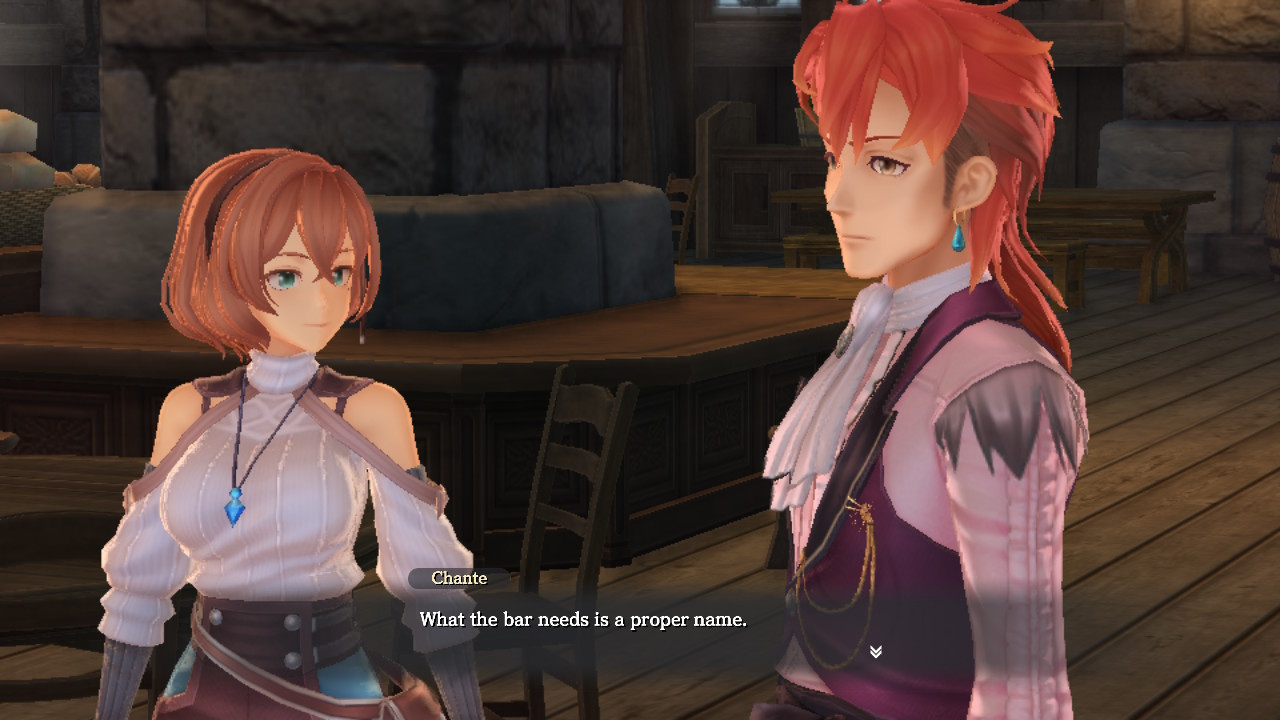 Characters like Chante in your HQ help you out in various ways throughout the game.

Allies recruited to the Dandelion’s cause over the course of the game not only supply aid during some dungeons and Grimwald Nox events, but also often set up services at the tavern that further help the party out. For instance, Silhouette gives you convenient access to all discovered shops’ merchandise in one handy locale and Parks gives you rewards for reporting how much of the map you’ve completed. Your base of operations evolves into quite the lively establishment, and I greatly enjoyed the impact it had on both the game and story. Materials acquired out on the field can also be traded in for even more unique materials that can then be used for crafting incredibly powerful items and weapon enhancements.

From a gameplay stance, everything about Ys IX: Monstrum Nox is polished to a fine sheen. I had immense fun simply fighting my way through the story and exploring every nook and cranny in Balduq. I also quite liked how the loading times for Ys IX on the Switch were relatively short. You can tell that a lion’s share of the title’s development was spent in making sure the game was enjoyable to play first and foremost, and I have to give it credit for that.

That being said, there is an almost bare bones approach to everything else in Ys IX. This is noticeable with the lack of an opening, as well as the overall quality of the graphics in the Switch port. Strange visual stuttering happens when characters move in place, and there’s an odd shininess to the graphics at times. Frame rate drops, along with lighting and textures popping in and out, occur at extremely noticeable moments and can ruin the sense of immersion you might otherwise get out of story scenes. The Switch port’s poor graphical quality is easily the Achilles’ Heel of this specific release, which is a shame given how high quality the action is. 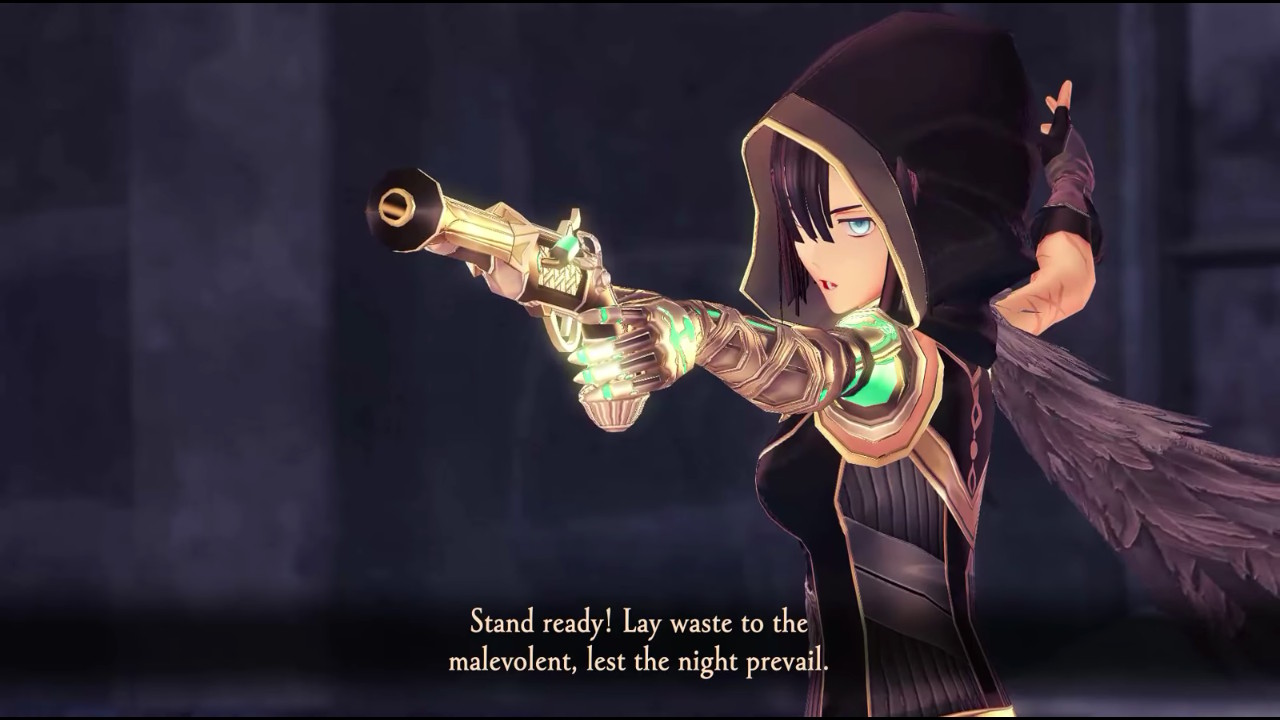 Overall, I quite enjoyed my time with Ys IX. It is a generally fun and entertaining game, with action elements that are wonderfully honed. It is a shame that the graphics in the Switch port diminish the experience as much as they do, because otherwise the title fits rather nicely on a handheld system thanks to its polished control scheme and wealth of content. What could have easily been one of the best action RPGs on the Switch is held back by the visuals, though it is a testament to just how strong of a game Ys IX: Monstrum Nox is that I view it so fondly despite this port’s obvious flaws. I certainly hope that Adol the Red’s adventures will continue if they persist with Ys IX’s entertaining gameplay.